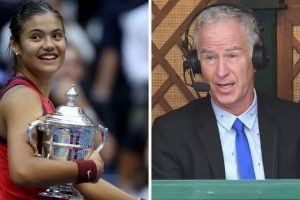 Emma Raducanu has received praise from a number of high-profile figures following her historic US Open win. Everyone from the Prime Minister to fellow big sporting names like Jurgen Klopp have come out to congratulate the 18-year-old for becoming the first qualifier in history to win a Grand Slam title. The Bromley teenager had previously received some backlash after retiring her Wimbledon fourth-round match with breathing difficulties, and seven-time Grand Slam champion John McEnroe has now doubled down on his criticism of the young star, despite her success.

Raducanu announced herself to the sporting world after her unprecedented run to the title in Flushing Meadows, but it wasn’t the first time she put herself on the radar.

Earlier this summer, the teenager received a wild card into Wimbledon – her first appearance at a Grand Slam – and stormed to the second week while ranked down at world No 338.

She was then forced to retire while a set-and-a-break down to Ajla Tomljanovic, later revealing she was struggling with breathing difficulties, though some took it as a sign of mental weakness and the teenager received criticism from the likes of Piers Morgan and John McEnroe.

Seven-time Grand Slam champion McEnroe said it appeared everything got “too much” for Raducanu, and hinted at the withdrawal being linked to mental health, with world No 5 Naomi Osaka skipping Wimbledon at the time after revealing she had suffered with bouts of depression.

Will Djokovic lose out to Nadal and Federer? Can Raducanu copy Serena? Have your say in our tennis poll.

“I feel bad for Emma, obviously. It appears it just got a little bit too much, as is understandable, particularly with what we’ve been talking about over the last six weeks with Osaka not even here,” McEnroe said during the BBC’s Wimbledon coverage at the time.

“How much can players handle? It makes you look at the guys that have been around and the girls for so long. How well they can handle it. Hopefully she’ll learn from this experience.

“I don’t think it helped that the previous match went as long as it did because it made her think about it more.”

Even the 18-year-old’s fourth-round opponent Tomljanovic branded the American’s comments as “very harsh” but he was later backed by Piers Morgan, who told Raducanu to “toughen up”.

Even the former GMB presenter has changed his stance on Raducanu since her historic US Open triumph, but McEnroe has now doubled-down on his criticism of the young Brit and admitted that he stands by the comments made during Wimbledon.

“I meant exactly what I said,” McEnroe told CNN on Tuesday.

“I tried to relate it in a small way to my experience when I first went to Wimbledon, also at 18.

“There’s a lot of great upsides, but there’s also pressure you put on yourself and expectations that others put on you.”

The former world No 1 also thought his comments were “vanilla” and insisted he was on Raducanu’s side.

He continued: “I mean that was, to me, as vanilla as it comes… I was very supportive of her, I thought, at the time.

“You know the papers over in England. Sometimes they make a big deal out of, to me, nothing.”

The new world No 23 has more than turned things around since her retirement at Wimbledon, coming through three qualifying matches and seven main-draw matches without dropping a set to not only become the first-ever qualifier to win a Major, but the first player to nab the title on just their second appearance at Grand Slam level.

McEnroe did praise Raducanu for completing the impossible in New York, adding: “I don’t think you could possibly do it any better than she did at the US Open. Are you kidding me? That’s insane. And that she’s been able to do this now there’s going to be obviously a lot more focus on it. It’s incredible.”
Source: Read Full Article