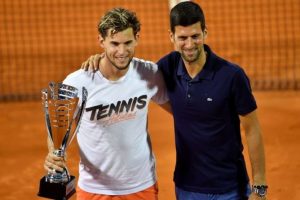 Dominic Thiem has given his verdict on Novak Djokovic’s chances of completing the Calendar Grand Slam at the US Open. The Austrian is the defending champion in New York after winning his maiden Major in 2020 but will not be competing this year after picking up a wrist injury during the grass court season. In his absence, the world No 6 is predicting Djokovic will capitalise on the opportunity to make history and win all four Slams in one season.

Djokovic is bidding to make history at the US Open by becoming the first man to win a record 21 Grand Slam titles, while also looking to be the first since 1969 to complete the Calendar Slam.

The world No 1 is the heavy favourite to take the title in Flushing Meadows but many have cast doubts over his chances, after he failed to win a medal at the Tokyo Olympics before pulling out of the Masters 1000 events in Toronto and Cincinnati.

One man that believes the Serb will be victorious in New York is none other than last year’s champion, Thiem.

The world No 6 captured his long-awaited first Major title at the US Open last year, coming back from two sets down to Alexander Zverev in the final.

JUST IN: Raducanu continues meteoric rise despite missing out on WTA title

He will not be defending his crown in New York this year, however, after picking up a right wrist injury at the Mallorca Championships in June.

The 27-year-old announced last Thursday (August 19) that he was shutting his season down early to give his wrist more time to heal.

He has now endorsed Djokovic as his favourite to win the title at the tournament, which begins in just one week.

“I think Djokovic will do it,” the reigning US Open champion said, according to TennisHead.

“Because of the Grand Slam – he has such an incredible will and because it is a chance of the century to win the Grand Slam. I think he won’t miss the chance.”

Thiem was able to capture the title in Flushing Meadows last year after the world No 1 was defaulted from the tournament.

Djokovic let his frustration get the better of him after going a break down to Pablo Carreno Busta in the opening set of their round of 16 clash.

As the Spaniard broke to lead 6-5 and give himself the chance to serve out the set, the three-time former champion hit a ball away in anger, which accidentally made contact with a lineswoman.

He was immediately disqualified from the tournament and, in Federer and Nadal’s absence, Thiem went on to be victorious.

Djokovic finds himself in a similar situation this year, with his fellow members of the Big Three also out of action.

Federer recently announced that he would be undergoing his third knee surgery since the beginning of 2020, which would leave him out of action for “many months”.

Meanwhile, Nadal decided to join Thiem in ending his 2021 season early as he continues to battle a left foot injury.