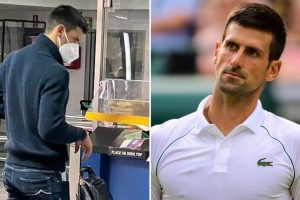 Novak Djokovic ’s lawyers have spoken out about their client’s night from hell, after the Serbian had his visa rejected by border control upon arrival for this month’s Australian Open.

The world No. 1 landed in Melbourne earlier this week ahead of the defence of his Grand Slam title, however his trip soon descended into chaos after he was detained by border control at the airport.

The chances of Djokovic competing in the tournament had been in the air for some time in the build-up to his trip, after event officials and leading politicians confirmed all players must be fully vaccinated against Covid-19.

The Serbian however repeatedly refused to reveal his vaccination status, but recently said he had received a medical exemption in order to compete.

This however was not accepted by border force officials upon his arrival, leading to an eight-hour stand off at the Melbourne airport.

Following the drama, Djokovic’s legal team have described the tennis star’s treatment by border officials as ‘procedurally unfair’, according to the Mail.

The world No.1’s interrogation reportedly began at around 12:21am local time, however Djokovic was then not notified of his visa being cancelled until nearly four hours later, to which he asked to wait until 8:30am so he could seek legal advice and communicate with tennis Australia.

Two hours later – after finally being offered somewhere to rest – the Serbian was woken and encouraged to make a decision, but once again reiterated he would prefer to wait until his 8:30am deadline.

Will Djokovic be allowed to compete in Melbourne this month? Let us know your thoughts in the comments section.

The report went on to include that Djokovic was told there was no point in him seeking advice from his legal team, and was continually pressured to make a decision.

An exhausted Djokovic finally accepted his cancelled visa at around 8:30am, resulting in the tennis ace being shipped off to a quarantine hotel in Melbourne.

The Serbian’s legal team however were left unimpressed by the treatment of their client, who felt the sheer exhaustion left the 27-year-old in no fit state to accept the decision to have his visa denied.

They commented: “The basis that the supervisors proffered as to why Mr Djokovic should go along with that [visa cancellation] was patently spurious and mischievous

The legal document continued: “The basis for reneging proffered by the supervisor was spurious because it plainly was not, and would never have been, better for Mr Djokovic if a visa cancellation decision were made while he was unrested and without consulting with his representatives.

“If Mr Djokovic had been given the time… his representatives could have made obvious further submissions and presented further obvious material, as relevant to why his visa should not be cancelled.”