Home » Tennis » Djokovic feeling no pain, inflicting plenty of it

Djokovic feeling no pain, inflicting plenty of it 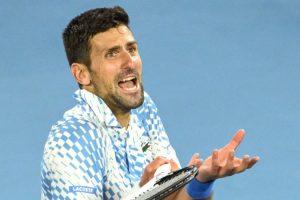 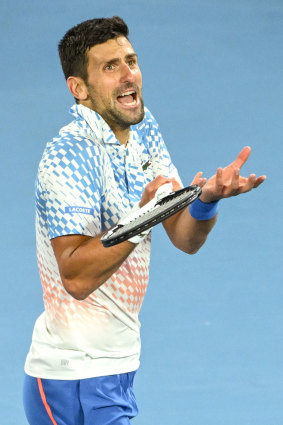 An animated Novak Djokovic on his way to another straight-sets victory at Melbourne Park.Credit:Eddie Jim

At intervals, Djokovic feels his hamstring. The rest of the time, his opponents are made to feel hamstrung. However much or little pain he is bearing at his end of the court, it’s doubly painful at the other.

On current indications, Djokovic’s going to flex and flinch and frown his way to a 10th Australian Open title. It’s only two matches away.

That’s not to say or suggest he’s a drama queen. He clearly has an issue. It just means that even as he advances, his disposition on court is more agitated and aggravated than usual. He’s a perfectionist. He doesn’t like to made to feel uncomfortable on a tennis court.

This is not Derek Redmond at the 1992 Barcelona Olympics, tearing his hamstring off the bone in the 400 metres, but limping to the line anyway on the shoulders of his father. This is a twinge to the most commonly hurt muscle in sport, catching every now and then, limiting Djokovic in some aspects of his regimen, annoying him, but expertly managed by specialists between matches and manageable on the court.

Djokovic manages it – it attests to his genius that he can trim his game to fit – but that does not mean it does not irk him.

So it was that the supreme player of this time grimaced and groaned and growled and all the while drove Rublev into the court.

He’d wince at the end of one point, hit a rasping service return the next. He’d remonstrate with the chair umpire about a heckler in the crowd, then belt an off forehand past Rublev on the baseline for another winner. 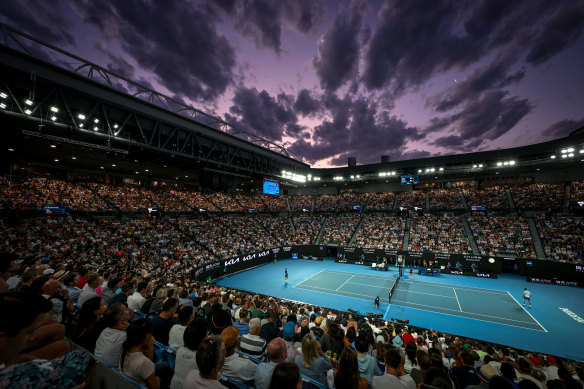 Night for it: A packed Rod Laver Arena watches the match.Credit:Eddie Jim

He’d rub his temples as if it was all too hard, then make up what looked like kilometres across the court to reach a ball, control it and rifle back a winner. If his hamstring was the problem then, he should look to arrange to tweak it before every match.

He’d howl at the wind – there was a bit of it around – at the sky, then hit another screamer. He’d half stumble in his service action, then seconds later fire down another ace.

He’d glare and yell at his box, as if he was Nick Kyrgios or something (he’s not). He’d reproach himself, as the only one who would understand, then play a lob so delicate it might have been a butterfly.

Momentarily, deep into the third set, he looked to be in serious trouble after a run and reach across the baseline. As he made his way to the change of ends, he was proppy. But when play resumed, so did normal service.

Poor Rublev. You could say that the Russian was caught between the devil and the deep blue court.

That’s not to suggest that Rublev was meek in defeat. He’s a boxing fan, who spars a bit himself. He is just about the hardest hitter on tour and he threw the kitchen sink at Djokovic, who turned off the tap, pulled out the plug and gave it back. Rublev hit some astonishing shots. It’s just that Djokovic got most of them back.

He’d turn himself inside-out to stay with Djokovic. Fortunately, he didn’t need a physio. For all his fierceness, all his fight, he got no further than a couple of break points, which he lost.

Rublev had been to and lost six quarter-finals previously. He might have thought himself unlucky to get to another and find Djokovic at the other end of the court. Or not. It’s not how pros think.

Still, you could not blame him if he asked why could he not get a Karen Khachanov or a nice little Tommy Paul, just once?

Paul’s next for Djokovic. While Djokovic was putting on his show on Rod Laver Arena, the American was doing media to elaborate on his own quarter-final win earlier in the day.

It might have been just as well that he wasn’t watching. The very thought of playing Djokovic in this form might have caused him a twinge in anticipation.