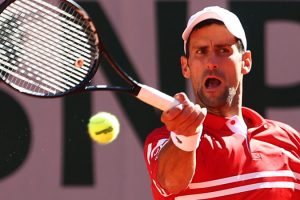 The 22-year-old Greek looked poised in his first grand slam final, going two sets up before it all fell apart against the world No.1. 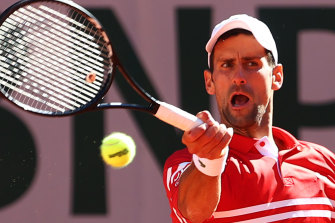 Novak Djokovic in the French Open final on Sunday.Credit:Getty Images

Tsitsipas won the first set after erasing a set point in the tie-breaker with a difficult forehand winner. In the second set he looked fresher than the 34-year-old Djokovic, who is coming off an epic semifinal against Rafael Nadal.

But Djokovic steadied his game in the third set, which turned in the fourth game, when he converted his fifth break-point chance of the game.

After that, Tsitsipas appeared to lose his way, while Djokovic found his form.

During the changeover before the fourth set, Tsitsipas laid on his back and was stretched out by the trainer, a back injury apparently hindering his movement. 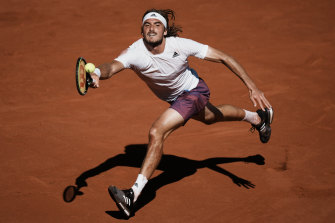 Stefanos Tsitsipas reaches for the ball against Novak Djokovic.Credit:AP

It was the sixth time in his career Djokovic had overcome a two-set deficit to win – and he did it in front of a vocal Roland-Garros crowd that was very much weighted in favour of the Greek.