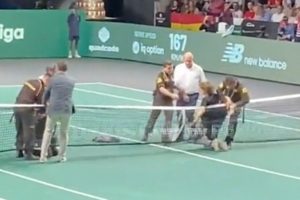 Two protestors stunned spectators during Wednesday’s Davis Cup action in Malaga when they stormed the court and attempted to tie themselves to the net. Borna Coric had just beaten Roberto Bautista Agut in the first match of the evening, but the dramatic action didn’t stop after the final point.

Coric had triumphed 6-4 7-6(4) against the Spaniard to hand Croatia a winning start to proceedings. But fans were caught by surprise as they were waiting for Marin Cilic and Pablo Carreno Busta to take to the court when a pair of protestors burst into sight.

Five members of security chased them onto the court and managed to contain the female protestor while she was still standing. But the male made a darting effort to attach himself to the net, leading to a struggle with three security guards as two other figures, likely tournament organisers, watched on from close range.

After the male was finally hauled off the net, he was pinned to the ground by all three security members as his female companion was dragged away. He was put in handcuffs and led away as the crowd, clearly unhappy with the behaviour, loudly whistled the duo off.

We’ll be bringing you the very latest updates, pictures and video on this breaking news story.
For the latest news and breaking news visit: express.co.uk/sport/football
Stay up to date with all the big headlines, pictures, analysis, opinion and video on the stories that matter to you.
Follow us on Twitter @dexpress_sport – the official Daily Express & Express.co.uk Twitter account – providing real news in real time.
We’re also on Facebook @dailyexpresssport – offering your must-see news, features, videos and pictures throughout the day to like, comment and share from the Daily Express, Sunday Express and Express.co.uk.