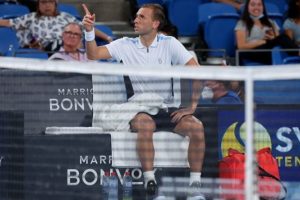 Dan Evans launched a tirade at the umpire when his opponent was allowed to take a lengthy bathroom break. The British No 2 lost a three-hour battle to Aslan Karatsev in the Sydney Tennis Classic semi-final, as the top seed defeated him 6-3 6-7(13) 6-3.

Evans was playing for the chance to meet compatriot Andy Murray in the Sydney ATP 250 final on Saturday.

The former world No 1 came from behind to beat fourth seed Reilly Opelka 6-7(6) 6-4 6-4 earlier on Friday, and reach his first final in more than two years.

Evans was bidding to make it the first all-British men’s final in ATP Tour history as he took to the court to face the top seed in a tough semi-final test.

After dropping the opening set, the world No 26 fended off two match points in a thrilling second-set tiebreak to take it 15-13 and force a decider.

He was broken during his first service game of the final set, after which Karatsev left the court for a five-minute bathroom break.

The ATP recently implemented a bathroom break policy, allowing players a maximum of three minutes once they have entered the toilet.

But those who are getting changed “receive two minutes for a change of attire in addition to the three-minute toilet break.”

As the Russian’s break extended towards the five-minute mark, Evans unleashed his frustrations at the umpire and accused him of failing to apply the bathroom break rules correctly.

“That’s a f***ing embarrassment to the sport, embarrassing. F**k him,” he screamed, waiting for his opponent to return to the court.

“You didn’t apply the rules. You didn’t!”

He also addressed the ATP Tour supervisor present on court, saying: “You guys sit there every week and do nothing.

“No-one on this tour plays tennis without running. You sit there on your walkie-talkie, why do you have that? I want an answer. Have you got an answer? How long was he off the court? Tell me, I want to know.

“The problem with this Tour is you are all scared. You’re telling me a lie. Just tell it as it is. This is f***ing embarrassment.

But the outburst seemed to momentarily work in Evans’ favour as he was able to break back and level things shortly after the resumption of play.

It wasn’t to be for the 31-year-old though, as Karatsev broke the Brit once again at a crucial moment at 4-3* to serve for the match and a place in the final.

It means Andy Murray will face the top seed in the final tomorrow, in what is his first championship match since he won the European Open in 2019.