Confident Medvedev set on going one better at Australian Open 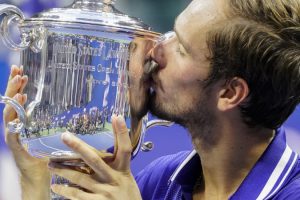 Trounced by Novak Djokovic last February in the Australian Open final, it is fair to declare Daniil Medvedev would never have heard of Alex Hawke.

But on his return to Melbourne Park, the Russian shares one key similarity with Australia’s Immigration Minister.

Over the past 12 months, they are the only men who have managed to stop the Serbian from winning a grand slam. For now, anyway, depending on the outcome of the reigning Australian Open champion’s Federal Court hearing on Sunday. 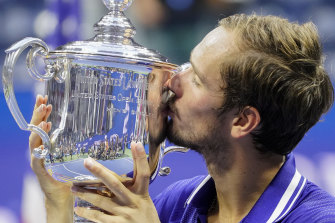 Medvedev halted Djokovic’s bid to become the third man to complete the Grand Slam in stunning fashion when completely outplaying the 20-time major winner in the US Open final last September. Now the 25-year-old stands as the man to beat at Melbourne Park over the next fortnight.

Should he claim the Australian Open, and Djokovic fail to avoid being deported, the right-hander will dethrone the rival, who has become a good friend, as the world number one.

He has more than made good on a rise he predicted as a teenager full of youthful exuberance at a time when Djokovic was steadily reeling in Roger Federer and Rafael Nadal on the all-time major list.

Shortly after winning his first major junior tournament in Berlin eight years ago, Medvedev was interviewed about his own aspirations and the strength of Russian tennis in general.

His hair cropped close to his temples, which remains his style of choice, the 17-year-old exuded a quiet confidence that his capabilities would take him to the top.

“Follow my results and the results of my peers from Russia,” he said. 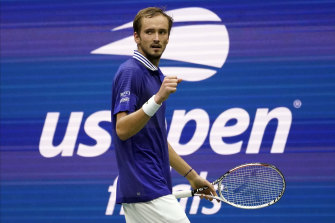 Russian Daniil Medvedev is looking to go one better at the Australian Open this year. Credit:AP

His prediction about the next great generation of Russian talent has proven accurate as well. In a stellar 2021, Russia won both the ATP Cup and Davis Cup.

His boyhood mate, Andrey Rublev is ranked No. 5. Karen Khachanov has been in the top 10. And Roman Safiullin showed great potential during the ATP Cup in Sydney.

“It was definitely cool that it happened. I remember this interview well, actually,” he said on Saturday.

“It was a good time. We were strong in juniors. Of course, [you are] probably going to find many interviews of guys that are going to say this and that it didn’t happen. [But] for us, it happened. The more Russians we see in the top 10, top 30, top 100, the better. Yeah, my words were right about our generation.”

The son of an electrical engineer, the lanky right-hander who enjoyed playing the harp as a schoolboy has always been ahead of the curve.

He graduated from school early after specialising in mathematics and science and enrolled in an economics and commerce degree at a prestigious think tank in Moscow.

But tennis was his calling from the moment he arrived at a swimming pool at the age of nine and instead spotted an advertisement for on-court coaching.

An early inspiration was easy to find. That year, Marat Safin defeated Lleyton Hewitt to win the Australian Open. No Russian has won the men’s singles in Melbourne since but Medvedev will start this Australian Open as the favourite.

Safin, a dual-grand slam champion, lamented recently that he was not more devoted to tennis in his prime. This is not an issue for the current Russian star, who has credited his surge to the top in part to the added discipline he adopted after marrying his wife Daria.

As an example, Australian coaches were left dumbfounded when they saw the fledgling champion doing suicide sprints on an indoor court just before the 2019 US Open.

He had enjoyed a phenomenal US summer. Yet instead of tapering for the championships, he was pushing himself further and harder again and again.

It became a major to remember as Medvedev earned himself the ire of the raucous New York crowds with his behaviour early on, which included raising the middle finger towards them as they were booing him.

Instead of shying away from his role as public enemy number one, he embraced it, egging the fans heckling him on. And he rode their energy and emotion all the way to the final by using it to motivate him.

After pushing Nadal to the brink in an epic decider, those hollering fans in the bleachers loved him. He may have lost his first final. But he had shown the steel of a future champion.

His remarkable triumph over Djokovic in New York in September has only firmed his conviction as he plots to go one better than last year at Melbourne Park.

“In general the US Open title gave me a lot of confidence, I want to say, in my life and in my tennis life as well” he said.

“I’m feeling much more confident than last year in terms of knowing my game [and] what I’m capable of.”