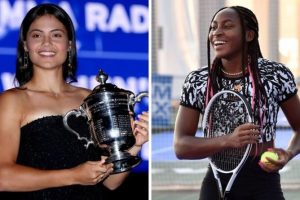 Coco Gauff feels she can win a maiden Grand Slam title in the “next year” following Emma Raducanu’s historic US Open triumph. The Brit became the first-ever qualifier to win a Major when she failed to drop a set en route to the title in Flushing Meadows last month, aged just 18. Her victory has now encouraged fellow teenage sensation Gauff, who is setting her sights on winning a Slam in a matter of months.

Raducanu achieved the seemingly-impossible in New York, coming through three qualifying rounds and seven main-draw matches without dropping a set, on her way to a first-ever title at the US Open.

Not only did the win make her the first qualifier ever to win a Major, the Bromley teenager also became the first woman to lift the title on just her second appearance at Grand Slam level.

The new world No 21 wasn’t the only teenager to have a fairytale fortnight in Flushing Meadows, as her final opponent had her own standout run.

Leylah Fernandez beat a host of Grand Slam champions and top players in Naomi Osaka, Angie Kerber, Elina Svitolina and Aryna Sabalenka on her way to the final, turning 19 during the tournament.

The championship match between Raducanu and Fernandez was the first all-teenage US Open women’s singles final since 1999, when a then-17-year-old Serena Williams defeated Martina Hingis, then 18, to win the first of her 23 Grand Slam titles.

Fellow teenage sensation Coco Gauff, who is younger than both Raducanu and Fernandez, has now spoken of the belief that her British and Canadian competitors gave her to win a Major in the near future.

“It was definitely inspiring for me, especially since I’m younger than both of them,” the American said, arriving in Indian Wells to make her debut at the WTA 1000 event.

“It just shows how much a year makes a difference, and what I can hopefully do next year.”

After making a bold statement in sharing her hopes to win a maiden Grand Slam title in the next year, Gauff praised Raducanu and Fernandez for their performances in Flushing Meadows.

Ahead of the tournament, the Bromley local was ranked at a then-career high of world No 150 while the Canadian sat at No 73 in the world.

Raducanu had put herself on the map during a breakthrough performance at Wimbledon earlier in the summer, making it to the second week as a wild card ranked down at world No 338 at the time, while Fernandez had started to make small waves on the tour after winning her maiden title earlier this year in March.

Gauff, who herself experienced a breakthrough moment at Wimbledon when she was just 15-years-old, credited the US Open finalists for looking like veterens while facing off on the biggest stage in tennis.

“It was just great to see two competitors who just love the game. They weren’t in the media so much before the tournament. You would think they’ve been on this stage for 20 or 30 years.

“It gave me a little bit of fire to believe that I can do it, too.”

Gauff stunned the sporting world back in 2019 when she came through qualifying and beat Venus Williams in the opening round of Wimbledon, while she was aged just 15.

The American made it all the way to the fourth round before losing to eventual-champion Simona Halep, and has gone on to cement herself as a staple on the WTA Tour.

Now aged 17, the world No 15 has two WTA singles titles and three doubles titles under her belt, and has made the quarter-final of the French Open in singles, while adding to the recent teenage success at the US Open by making it all the way to the women’s doubles final alongside Caty McNally.