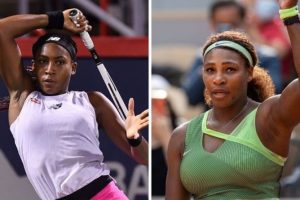 Coco Gauff has expended on her dream to play mixed doubles with Roger Federer and Nick Kyrgios. The 17-year-old tennis sensation revealed earlier this week that both were her ideal partners after the Aussie offered to play with her on social media. Gauff has also now revealed that her dream opponent is Serena Williams, and she hopes to play the 39-year-old before she retires.

Kyrgios offered to play with Gauff at the Australian Open after seeing a clip from her interview with the ATP where she said the Australian was a “super funny guy and off the court super kind.”

After hearing the 17-year-old’s praise, he took to Twitter to reply to the video, saying: “@Coco Gauff mixed at Aussie Open?”

The world No 24 was quick to respond, replying: “Let’s make it happen.”

Gauff then expanded on her dream mixed doubles partners during the Omnium Banque Nationale, saying Kyrgios and Federer had always been the players she’s wanted alongside her on the court.

JUST IN: Medvedev apologises to opponent after setting up Isner semi-final

Even with the Australian Open being five months away, Gauff has now said the prospect of playing on the same side of the net as Kyrgios during his home Grand Slam was “really exciting.”

“I mean, for me, mixed doubles is one of the most relaxed events in tennis,” she said, speaking on the Match Point Canada podcast.

“It only happens really four times a year, maybe five times when the Olympics comes around. I don’t know, I’ve only played mixed doubles one other time, it was with my friend Chris Eubanks, so if it were to happen it would be super exciting.”

Although she complimented the current world No 80 in her interview with the ATP, Gauff says she didn’t expect to be asked to share the court with him.

She continued: “I didn’t think he’d ask that to be honest but him and Roger have been the people that I’ve always wanted to play mixed doubles with and, you know, Roger was kind of like I already knew that wasn’t going to happen so Nick is definitely close up there on the bucket list.

“I’m hoping that it can happen and hopefully there’ll be a crowd there too because that’s really what I’m excited about, playing with Nick Kyrgios in Australia for the huge crowd.”

It’s no surprise the 17-year-old was caught off guard by the Aussie’s offer, as she revealed earlier this week that she had hit with him when she was just 13.

“He hit with me at the Miami Open when we were 13 but we’re not super close. I guess he asked the doubles question because I did an interview for ATP socials and they asked me who I wanted to be friends with. I said Nick. I just really respect him as a person and player,” she told the media when asked about a friendship with Kyrgios.

It’s not just the ATP stars Gauff has set her sights on either.

During her appearance on the Match Point Canada, she also revealed the one WTA player she’d love to see on the other side of the net.

“You know, she’s been on my bucket list forever to play and she’s obviously one of my idols. I got to play Venus twice so Serena, just one time before she heads out. But yeah, that would be a dream match. Especially at a Grand Slam, that would be pretty cool.”