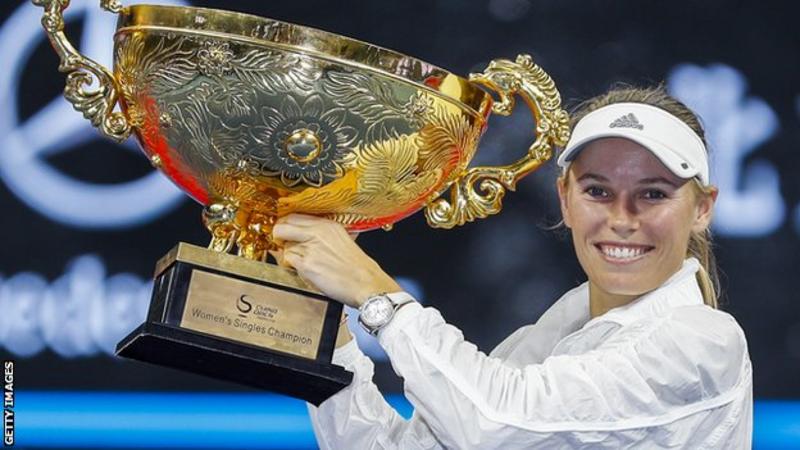 Former world number one Caroline Wozniacki says she was “shocked” to be diagnosed with rheumatoid arthritis, but wants to become a role model for people with the condition.

The Dane, 28, discovered she had the auto-immune disease in August and says “it has been a lot to take in”.

Rheumatoid arthritis causes pain, swelling and stiffness in the joints.

“You feel like you’re the fittest athlete out there and all of a sudden you have this to work with,” she said.

Wozniacki – who won the Australian Open in January, her only Grand Slam to date – revealed she had the condition after her season ended with defeat at the WTA Finals.

She said she began to notice symptoms of fatigue after Wimbledon, where she lost in the second round, and one morning was unable to lift her arms over her head.

The world number three says some days she has struggled to get out of bed and doctors diagnosed her in August before the US Open.

“In the beginning, it was a shock,” said Wozniacki. “It’s obviously not ideal for anybody, and I think when you’re a professional athlete, it’s also not even more ideal.

“I think I didn’t want to talk about it during the year because I don’t want to give anyone the edge or thinking that I’m not feeling well, but I have been feeling well.

“You learn how to just cope after matches. Some days you wake up and you can’t get out of bed and you just have to know that’s how it is, but other days you live and you’re fine. You don’t even feel like you have it.”

Rheumatoid arthritis can affect people of any age, although often starts when a person is between 40 and 50. It occurs when the body’s immune system targets affected joints, leading to pain and swelling.

The NHS says there is no cure for the condition, but medication and other treatments can relieve symptoms.

Wozniacki has been taking medicine and receiving treatment to manage the disease and is positive the condition will not impact on her career – she won the China Open earlier this month.

“I think [winning in Beijing] meant so much to me,” she added. “I think you obviously start asking yourself questions: What does this mean? Does it mean I can’t get in as great of shape as I was before?

“Winning was huge. It also gave me the belief that nothing is going to set me back. I’m going to work with this and this is how it is, and I can do anything.

“I’m very proud of how I have been so positive through it all and just kind of tried to not let that hinder me.

“I know there are a lot of people in the world that are fighting with this, and hopefully I can be someone they can look up to and say that if I can do this, then they can too. And you just kind of have to get together and pull each other up.”