Carlos Alcaraz to use Rafael Nadal stance against Novak Djokovic 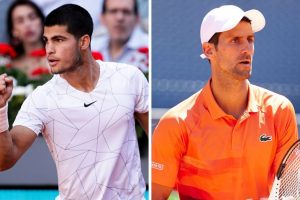 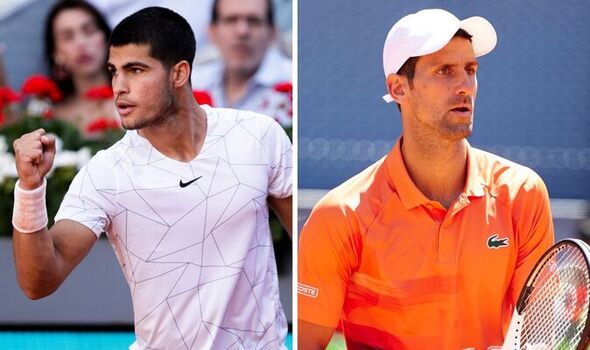 Carlos Alcaraz is planning to approach his first meeting against Novak Djokovic with the same mindset he used in his maiden victory over Rafael Nadal. The world No 9 ousted the five-time former champion 6-2 1-6 6-3 in Friday’s quarter-final and now faces the top seed for a spot in the Madrid Open final.

Alcaraz is taking on world No 1 Djokovic for the first time in his career in Saturday’s semi-final. The 19-year-old is fresh off his first victory over fellow Spaniard Nadal and will be taking the same stance into his meeting with one of Nadal’s biggest rivals.

Looking ahead to his clash with the top seed after one of the biggest victories of his young career, the four-time title winner said: “One of the best players in history. All that he achieved is incredible. But I’m here.

“It’s my first time facing him but not my first time playing a big Masters 1000 match in a big stadium so I’m gonna enter the match the same way I did today.” The seventh seed needed three attempts to finally get a win over Nadal but will be hoping to down Djokovic at the first time of asking, with Alcaraz now on an eight-match winning streak following his title run in Barcelona.

The world No 9 was also happy to receive praise from his upcoming opponent, with Djokovic saying he was great “in all fronts” and claimed Alcaraz was “fantastic for our sport.” Responding to the world No 1’s kind words he said: “I feel good to hear that, that the best say good words to you.

Alcaraz also got his tour-leading sixth top 10 win of 2022 against Nadal and will be hoping to extend that to seven wins over Djokovic on Saturday. And his most recent victim believes he has a real chance against the world No 1, with Nadal claiming he sees no reason why Alcaraz can’t beat his great rival.

“Carlos can win perfectly. I don’t see any reason why he cannot win,” the world No 4 said after his defeat, also admitting Djokovic would be better prepared to face the teenager than he was. “It’s true that he cannot have the downside that he had on the second set today, but he plays with a lot of adrenaline.”