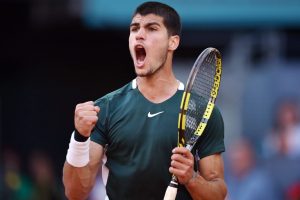 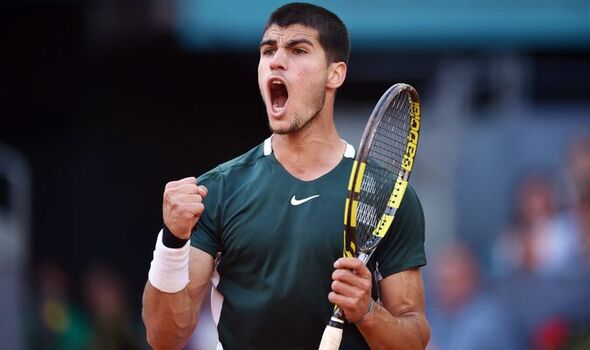 Carlos Alcaraz has defeated Novak Djokovic a day after his maiden victory over Rafael Nadal. The home favourite came from a set down to win 6-7(5) 7-5 7-6(5) after three hours and 35 minutes in what was his first meeting with the world No 1. He will now face either Alexander Zverev or Stefanos Tsitsipas in a bid to win his fourth title of the season and a second Masters 1000.

Alcaraz arrived onto court with his ankle taped after rolling it in the second set of his match against Nadal on Friday but didn’t appear hindered by it, picking up where he left off against another of the sport’s greats as he broke Djokovic in the first game of the match with a forehand curled down the line, reminiscent of his match point against Nadal.

The 19-year-old was pushed on his serve and managed to save a break point to lead 2-0 and another to leave 4-2, but it was then three games in a row for the world No 1 as Alcaraz fired four unforced errors in one game to get broken for 4-4. He could then be seen complaining at his box during the change of ends while 4-5 down, appearing to ask his coach Juan Carlos Ferrero to smile more in what was one of the most animated displays from the young player.

Alcaraz managed to hold on and force a tiebreak but quickly went 1-5 down. He recovered to save the first three of Djokovic’s four set points but lost his footing while 5-6 down as the top seed managed to close out a 63-minute first set 7-6(5).

JUST IN: Madrid finalist is richer than Federer, Nadal and Djokovic combined

It was a neck-and-neck second set until the teenager set up a break point at 3-2 with one of his dropshots – already a trademark in his young career – but the 20-time Major champion managed to save it, though this time he was the one complaining towards his box. Alcaraz was then forced to save two crucial break points at 4-4 which would have given the three-time former champion the chance to serve out the match, as the Manolo Santana stadium crowd erupted into chants of “Carlos” during the change of ends.

Alcaraz was once again forced to fend off a break point when he was leading 40-30 on his serve before hitting a double fault and a failed drop shot to gift Djokovic another chance to break, but managed to keep himself alive and immediately went 0-40 up on the Serb’s serve to set up three set points. He managed to convert his second with a stunning winner from the corner of the net, forcing a decider to determine who would advance to Sunday’s final.

The world No 9 then struggled to convert multiple break point chances in the final set, holding three at 2-1 and another two at 3-2 while he was forced to save one against Djokovic at 3-3. Alcaraz dug himself out of a hole at 0-30 down to hold on for a 5-4 lead and the world No 1 was then forced to save a match point at 30-40 down. He had to wait until his fourth game point to hold on for 5-5, with the match eventually going to a fitting end in a final set tiebreak.

This time it was Alcaraz who took the early lead with an immediate mini-break, going 3-1 up. Djokovic got himself back on serve in the tiebreak but the Spaniard got his mini-break advantage straight back. Trying to play it safe to keep his lead, a more conservative serve from Alcaraz cost him the lead once more but Djokovic sent a ball long to gift Alcaraz two more match points, with the teenager able to convert the third to close out a 6-7(5) 6-4 7-6(5) comeback victory.

Alcaraz now awaits either Alexander Zverev or Stefanos Tsitsipas in the final, with the pair facing off in the second semi-final match on Saturday night. The world No 9 has never lost a match to the Greek, defeating him en route to his title wins in Barcelona and Miami this year, and stunning the then-third seed at the US Open last summer.

Zverev is the defending champion in Miami and has defeated Alcaraz in both their previous meetings, at the ATP 500s in Acapulco and Vienna last year, both on a hard court. But the pair have not faced off since the 19-year-old became one of the toughest opponents to beat in his so far stunning 2022 season.