Australian PM doubles down on Novak Djokovic outlining ‘sacrifices’ made 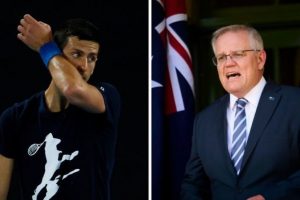 The Australian Prime Minister has spoken out after Novak Djokovic had his visa revoked for a second time by the Immigration Minister on Friday. Scott Morrison threw his support behind Alex Hawke’s decision to revoke the world No 1’s visa “on health and good order grounds” and “in the public interest”. Djokovic is now expected to attend an interview with immigration on Saturday before being deported, unless his lawyers appeal the decision.

Djokovic initially had his visa cancelled when arriving in Melbourne last week, but won an appeal to have it reinstated on the grounds of “procedural fairness” after the government conceded they failed to give the Serb enough time to prove his medical exemption.

It meant the world No 1 was able to freely enter Melbourne after spending the weekend in a detention hotel, but Immigration Minister Alex Hawke still had personal powers to cancel his visa for a second time, and exercised these on Friday.

After days of consideration, Djokovic’s legal team were verbally informed of the decision to cancel his visa at 5:35pm Melbourne time, and given the decision in writing at 6:03pm, shortly after it was announced publicly.

Mr Hawke said he made the decision “on health and good order grounds, on the basis that it was in the public interest to do so,” and said he “carefully considered information provided to me by the Department of Home Affairs, the Australian Border Force and Mr Djokovic.”

The Prime Minister has now commented on Mr Hawke’s decision, and thrown his support behind deporting the nine-time Australian Open champion.

“I note the Minister for Immigration’s decision in relation to Mr Novak Djokovic’s visa.

“I understand that following careful consideration, action has been taken by the Minister to cancel Mr Djokovic’s visa held on health and good order grounds, on the basis that it was in the public interest to do so,” Scott Morrison said on Friday, shortly after it was confirmed Djokovic’s visa has been cancelled.

Explaining the reasoning behind the Immigration Minister’s decision, the PM said sacrifices made by Australian citizens deserved to be “protected” – likely the public interest grounds Mr Hawke referred to in his own statement.

He continued: “This pandemic has been incredibly difficult for every Australian but we have stuck together and saved lives and livelihoods.

“Together we have achieved one of the lowest death rates, strongest economies and highest vaccination rates, in the world.

“Australians have made many sacrifices during this pandemic, and they rightly expect the result of those sacrifices to be protected. This is what the Minister is doing in taking this action today.”

Djokovic will not need to go into detention on Friday night and has been asked to attend an interview with immigration on Saturday, but his lawyers could appeal the decision and ask for a review.

Scott Morrison admitted in his statement that he expected the Serb’s legal team to appeal, saying he was unable to comment further in anticipation of further proceedings.

“Our strong border protection policies have kept Australians safe, prior to COVID and now during the pandemic,” he added.

“Due to the expected ongoing legal proceedings, I will be not be providing any further comment.”

Our strong border protection policies have kept Australians safe, prior to COVID and now during the pandemic. Due to the expected ongoing legal proceedings, I will be not be providing any further comment.