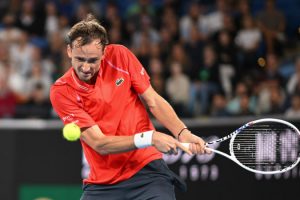 ‘Number 1 in my eyes’: Kyrgios responds to Kokkinakis’s 4am defeat

Nick Kyrgios sent a message of support to his championship doubles partner Thanasi Kokkinakis after a comeback from Andy Murray in the early hours dashed Kokkinakis’s Australian Open hopes.

Kokkinakis posted a frustrated tweet in the aftermath of the match (“This f—ing sport man”), which Kyrgios retweeted, adding “Love you brother, u number 1 in my eyes”.

The top Australian player, who withdrew from the tournament with a knee injury, added another message of support this morning.

It was a bizarre tournament for Kokkinakis. His first match with Fabio Fognini was split over two days thanks to extreme heat and an evening downpour. The match started on Tuesday but the weather delay forced the pair to wait until Wednesday to finish it off, which Kokkinakis did in three minutes.

Then his post-match interview went viral when a reporter accidentally called him Nick.

In a triumph of absurd timing that embarrassed the sport, the former world No.1 defeated Australia’s Thanasi Kokkinakis in the second-latest finishing grand slam match in the history of the tournament.

It might have been the greatest comeback of Murray’s career – it was certainly the longest – but it was witnessed by a precious few.

At 35, with a tin hip and down two sets and break points in the third, he found a way to fight back and win just as it seemed the game would run into breakfast TV.

“Look, it’s obviously amazing to win the match, but I also want to go to bed now,” Murray said.

The matches to watch today

Good morning and welcome to day five of our live Australian Open coverage.

A few of our reporters are bleary-eyed after one of the greatest Australian Open matches of all time played out until 4am last night.

The mammoth match between Thanasi Kokkinakis and Andy Murray is the second-latest grand slam match behind Lleyton Hewitt and Marcus Baghdatis’ match in 2008 that finished at 4.34am.

More on that epic in a minute. For now, here are the top three matches to keep an eye on today, as Stefanos Tsitsipas attempts to stave off the curse of the top seeds and world No. 1 Iga Swiatek takes on the reigning Wimbledon champion.