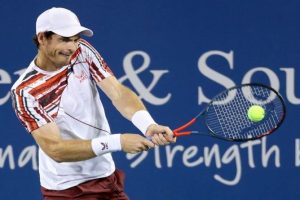 Andy Murray shows off his room in Tokyo Olympic village

Andy Murray took advantage of his wildcard spot and defeated Richard Gasquet 6-4, 6-4 in the opening round of the Western and Southern Open in Cincinnati. The triumph at the ATP 1000 event saw Murray return to singles action after he withdrew from the event at the Tokyo Olympics due to a thigh issue.

He still participated in the doubles with partner Joe Salisbury but the duo crashed out in the quarter-finals.

The 34-year-old was unfazed by the rain delay and unleashed 14 aces – including 10 in the first set – as well as 38 winners in the match.

“I was able to step in and control a lot of the points,” Murray said. “When I play like that, I create opportunities and can put a lot of pressure on my opponent.”

Murray will face the winner between ninth seed Hubert Hurkacz and Alejandro Davidovich Fokina in the second round.

JUST IN: Murray setting short-term goals only as he focuses on upcoming US Open

In his first press conference since his Olympic disappointment, Murray admitted he would not be setting any long-term objectives until after the US Open.

“I think I need to set short-term goals, it is what’s really important just now because it’s been very difficult to plan medium- and longer-term targets because of various different issues that I’ve had this year,” he said.

Murray made it to Wimbledon after two hip surgeries in 2018 and 2019 derailed his career.

The injuries forced the Brit to ponder retirement as it was unclear whether he would be able to play tennis at the highest level again.

After he contracted Covid before the Australian Open and missed Roland Garros, Wimbledon was Murray’s first Grand Slam appearance of this year and he reached the third round before losing to Denis Shapovalov in straight sets.

Murray has been added to the main draw of the US Open – where he won his first Grand Slam title in 2012 – which begins on 30 August.

Elsewhere, British men’s number one Dan Evans lost 6-2, 4-6, 6-3 to Diego Schwartzman while Heather Watson advanced with a 6-2, 3-6, 6-1 victory over Aliaksandra Sasnovich of Belarus.

The British duo had their first-round matches suspended due to rain on Monday.

Watson showed off her mettle to seal victory and set up a second round clash with Australian world number one Ashleigh Barty.

Evans, who was forced to miss the Olympics after testing positive for Covid-19, suffered his fourth successive loss since his third round Wimbledon exit.