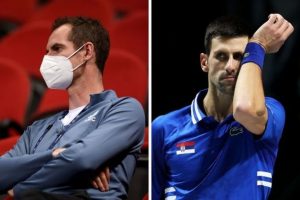 Former world number one Andy Murray has sent support to Novak Djokovic amid his current visa saga in Melbourne. Since arriving from Dubai on Wednesday, Djokovic has been held in an immigration detention hotel, which Murray believes is a ‘really bad’ look for tennis.

The record nine-time Australian Open champion was due to defend his title at Melbourne Park later this month.

He is a high-profile anti-vaxxer amid the Covid pandemic but thought Tennis Australia and Victoria State granted him a medical exemption to appear at the tournament.

However, the Australian Border Force (ABF) held Djokovic for several hours at Melbourne Airport upon arrival, and he later had his visa revoked.

Now imprisoned whilst he awaits a verdict from the Federal Circuit and Family Court of Australia on Monday, the Serbian superstar has received global support.

One of the latest tennis figures to address the controversial situation is his longtime friend Murray, who described it as shocking.

He said: “I think everyone is shocked by it [the circumstances], to be honest.

“I’m going to say two things on it just now. The first thing is that I hope that Novak is OK. I know him well, and I’ve always had a good relationship with him, and I hope that he’s OK.