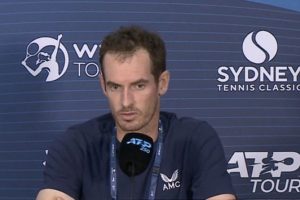 Andy Murray insists more questions need to be answered as Novak Djokovic prepares to defend his Australian Open title. Djokovic is currently set to take his place at the first Grand Slam of the year when it gets underway next Monday after a court this week overturned the decision to cancel his visa.

“It’s positive that he’s not in detention anymore,” Murray said on Tuesday. “Obviously he won in court so, you know, that’s a positive thing for him. Hopefully, he will be able to concentrate on the tennis now.

“I think there are still a few questions that need to be answered around the isolation and stuff. I’m sure we’ll hear from him in the next few days.

“Until that happens, it’s tough to give a definitive opinion on everything.”

Djokovic arrived in Melbourne last Wednesday after being given a medical exemption to play in the Australian Open.

The tennis ace is not vaccinated against COVID-19 and wouldn’t have been able to play at the tournament if it weren’t for the exemption.

But he was apprehended by Australia Border Force after touching down and was told his visa would be cancelled.

Djokovic appealed the decision and was moved to a state-run immigration facility as he waited for Monday’s court proceedings.

And Judge Anthony Kelly ultimately ruled in the player’s favour.

The drama surrounding Djokovic’s court proceedings has been closely followed by tennis fans around the world, with some saying it showed the sport in a poor light.

The player had previously refused to reveal his vaccination status but was forced to admit that he had not been jabbed when questioned by border officials.

During his interviews, he also said that he had contracted the virus on two separate occasions, one of which came in December.

The Serbian was freed after Monday’s ruling and later took to the tennis court to undertake his first Australian Open preparations since arriving Down Under.

Djokovic is the most successful player in the tournament’s history after lifting the trophy a record nine times.

He won his first Aussie title in 2008 and is unbeaten at the tournament since 2018 after winning the last three events.

Murray, meanwhile, is set to compete at the Australian Open for the first time since 2019 after being handed a wildcard.

The Briton has reached the final of the major five times but has never lifted the trophy.

Three years ago he was defeated by Roberto Bautista Agut in the first round after an epic five-set battle.

And he began his warm-up for the tournament by winning his first match on Australian soil for three years as he saw off Norwegian qualifier Viktor Durasovic 6-3, 6-1 in the first round of the Sydney Tennis Classic.