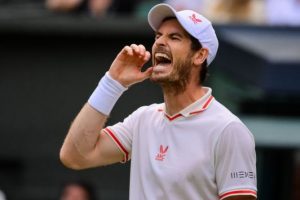 Two-time Wimbledon champion Andy Murray has hit back at Piers Morgan who continues to criticise British teenager Emma Raducanu for medically retiring during her fourth round match. The incident caused a storm on social media, with John McEnroe also receiving backlash for speculating that she could not handle the occasion.

Raducanu experienced breathing difficulties during the second set of her fourth-round tie with Australian Ajla Tomljanovic.

Her physical struggles were obvious to those watching, although she battled on for several games before medical staff eventually escorted her off the court.

On Tuesday, Raducanu released a statement on Twitter that stated: “I’m sorry our match ended the way it did.

“I was playing the best tennis of my life in front of an amazing crowd this week and I think the whole experience caught up with me.

“At the end of the first set, after some super intense rallies, I started to breathe heavily and felt dizzy.

“The medical team advised me not to continue, I was not well enough to carry on.”

Morgan pulled no punches when he backed John McEnroe’s post-game comments and told the 18-year-old to ‘toughen up’.

The latest Twitter exchange involving Morgan and Murray stemmed from an article by The Telegraph which implied that the hate directed towards Raducanu was misogynistic.

“This isn’t equality, ladies.. (if I’m still allowed to call you that).”

Murray, who was well-beaten in the third round by Denis Shapovalov, defended his compatriot by saying: “Does the article actually say that though? ‘Criticising young male athletes is fine.’ I’ve read it and it wasn’t my takeaway.

“I think criticising young athletes is fine by the way I’m just not sure what exactly she did during Wimbledon to deserve anything other than praise?”

Indeed, Raducanu qualified for the tournament as a wildcard and defied all the odds by making it all the way to the last 16 competitors in the women’s draw.

Currently ranked 336 in the world, the teenager is so young that she is still waiting for her A-level results, which is why many feel that the criticism directed her way is unfair.

Whichever way it is spun, it has been a rollercoaster couple of weeks for Raducanu and the social media back-and-forth does not appear to be over just yet.