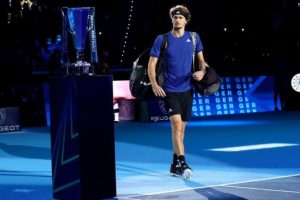 Alexander Zverev has won his second Nitto ATP Finals title. The world No 3 put on a dominant display against defending champion and world No 2 Daniil Medvedev in Sunday’s (November 21) final, beating the Russian 6-4 6-4 in an hour and 15 minutes to win the final match and final title of the season. It means the German ends the year with the most titles of any male player this season with six.The victory comes one day after Zverev defeated Djokovic in the semi-final, putting an end to the world No 1’s stunning season.

The final ATP Tour match of the season was the third meeting between Medvedev and Zverev in as little as 15 days.

The Russian got the better of the world No 3 in their recent encounters, defeating him in the Paris Masters semi-final and edging a narrow victory in the Red Group round-robin match earlier this week in Turin, 6-3 6-7(4) 7-6(6).

The world No 2 had also won their previous five encounters in a row, after Zverev previously led their head-to-head five wins to one loss, but the German hadn’t beaten him since the group stage of the 2019 ATP Finals.

It was the third seed who was first to strike in the final, earning himself three break points in the third game of the match, taking his second as a dead let cord saw one of Medvedev’s shots fall on his side of the net.

The 2018 ATP Finals champion forced another break point while Medvedev was serving at 2-3 but last year’s title winner was able to hold on and keep himself one break behind his opponent, though the world No 3 closed it out 6-4 after 33 minutes.

Zverev was too strong on serve in the opener, dropping just one point on his first serve in the set, while Medvedev hit just one winner in the entire set.

The German’s momentum continued into the second, as he immediately broke his opponent in the first game to strengthen his foothold on the match.

Medvedev threatened his opponent while Zverev was serving at 3-2, making it to deuce for the first time in the match, but was unable to capitalise or even create a break point chance as the 24-year-old held on to lead by a set and 4-2.

Zverev continued to hold on until the end of the match, his serve proving impenetrable, and served out a 6-4 6-4 victory in an hour and 15 minutes to become the Nitto ATP Finals champion for the second time in four editions of the tournament, and get revenge over Medvedev for his group-stage loss earlier in the week.

The world No 3 had also impressed against top seed Novak Djokovic just one day earlier in the semi-final.

He dominated from the baseline, leaving the world No 1 looking lost at times on the court as he clinched a 7-6(4) 4-6 6-3 victory shortly before midnight on Saturday (November 20).

Meanwhile, Medvedev had wrapped up his own semi-final earlier that day, needing just an hour and 19 minutes to get the better of debutant Casper Ruud 6-4 6-2.

It means Zverev ends the season on six titles – the most won by any male player in 2021, surpassing the record of five he held with Djokovic and Ruud.

He won two ATP 500 titles Acapulco in Vienna, two Masters 1000s in Madrid and Cincinnati, and most impressively, the Olympic gold medal in Tokyo over the summer.

It also means the German gets himself level at 6-6 in his head-to-head against Medvedev, while the 2020 ATP Finals champion’s unbeaten streak at the year-end championships comes to an end.

Medvedev went 0-3 in the group stage during his debut at the tournament in 2019, before going unbeaten in 2020 on his way to the title, getting wins over Djokovic and Rafael Nadal en route.

He was also unbeaten in the group stage this week, beating Hubert Hurkacz, Zverev, and first alternate Jannik Sinner – who stepped in for injured countryman Matteo Berrettini – before defeating Ruud in the semi-final.