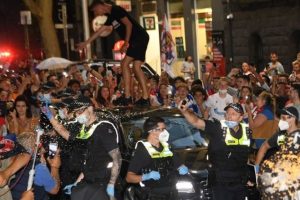 Police in Melbourne have reportedly sprayed a substance at Novak Djokovic fans as they continue to protest against the star’s treatment ahead of the Australian Open. Supporters gathered in their hundreds outside the Serb’s lawyer’s office as confusion continues over whether or not he will be deported.

The Guardian tweeted a video of protesters along with a post which read: “Absolute mayhem by Novak Djokovic’s lawyer’s office on Collins Street. A car leaving the office is completely surrounded by people cheering ‘free Nole’.”

And they later added: “Police eventually surrounded the car and sprayed a substance at the crowd. A lot of coughing and people rinsing eyes. After about 5 mins of the car coasting and surrounded, the car left. Back window tinted.”

It comes after Djokovic won his court battle challenging the cancellation of his Australian visa, which suggested that he would now be able to play in the Open.

However, there were later reports stating that he had been arrested just hours after being released from the hotel he has been forced to quarantine in since last week – although these have not been verified.

The whole situation has been an incredible mess, with Australia’s strict laws regarding coronavirus meaning that Djokovic has had to face numerous hurdles to get into the country after admitting he has not been vaccinated.

And his fellow tennis star Rafael Nadal has slammed all sides in the ugly saga.

Speaking to Spanish outlet Onda Cero on Monday, he said: “Whether or not I agree with Djokovic on some things, justice has spoken and has said that he has the right to participate in the Australian Open and I think it is the fairest decision to do so, if it has been resolved that way. I wish him the best of luck.

“On a personal level, I’d much rather he didn’t play.

“It’s sports, many interests move around it, on a general level, at an economic, advertising level. Everything is much better when the best can be playing.

“The most important institutions in the world say that the vaccine is the way to stop this pandemic and the disaster that we have been living for the last 20 months.”

Meanwhile, Djokovic’s family are planning to hold a press conference in the coming hours to provide an update on the situation.

His brother Djordje told Serbian media: “Novak has shown that he is persistent and that he believes in his ideals, he won this fight for the whole world.

“The judge has made the right ruling based on facts, but we are receiving info that the minister is above the court.

“Novak is in a political whirlwind, the people in Australia are unhappy since they have been locked down basically since the pandemic started.

“It’s definitely politics. What we can do is to let this be known all over social media – they want to capture and lock up Novak again.