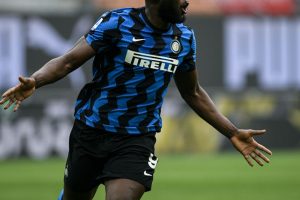 Zlatan Ibrahimovic appeared to put an end to his bitter feud with Romelu Lukaku in a show of respect in the Milan derby.

There has long been bad blood between the two strikers and tempers boiled over in the Coppa Italia quarter-final last month.

AC Milan veteran Ibrahimovic and Inter ace Lukaku squared up to each other and were heard exchanging personal insults just before half-time.

As such, Sunday's clash between Serie A's top two teams was billed as an enticing rematch between the pair of warring frontmen.

As it happened, Inter cruised to victory to open up a four-point lead over their local rivals.

Lukaku was the standout performance for the Nerazzurri, assisting Lautaro Martinez's fifth-minute opener and scoring his side's third in the second half.

The Belgian celebrated emphatically after firing past Gianluigi Donnarumma in the 65th minute and appeared to repeatedly scream "Dio" – meaning "God" – at Ibrahimovic.

It was likely a reference to the Swede's remarks after Milan's 2-1 derby win last October, when he said: "Milan never had a king. They have a God."

Ibrahimovic's comments were, in turn, a response to Lukaku, who earlier in 2020 declared "There's a new king in town" after Inter beat the Rossoneri 4-2 in February.

But after Lukaku shouted "Dio" at him in Sunday's showdown between the two great rivals, Ibrahimovic did not react angrily.

Will Inter kick on from their Milan derby triumph to win Serie A? Have your say in the comments.

Lukaku's strike means he is the first player in 71 years to score in four Milan derbies in a row. It also takes him clear of Cristiano Ronaldo in the Serie A top-scorer charts with 17 goals this season.

Inter are searching for their first Scudetto since 2010 and manager Antonio Conte said: "Congratulations to my players, they prepared well for this game.

"Is this the best victory in my coaching career? I hope the best is yet to come."