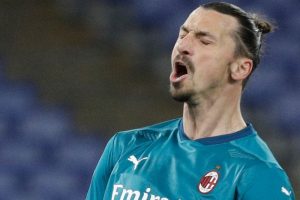 Zlatan Ibrahimovic could miss out on the chance to face former club Manchester United because of a thigh injury, according to Sky in Italy.

Ibrahimovic underwent a scan on Monday morning after suffering the injury during AC Milan’s 2-1 win over Roma on Sunday and will not be re-evaluated for another 10 days.

He will miss Serie A matches against Udinese and Verona, which come before Milan’s trip to Old Trafford for the first leg of their Europa League last-16 clash on March 11. The second leg is seven days later.

The 39-year-old striker established himself as a fan favourite during his short spell at Old Trafford, scoring in the Community Shield and EFL Cup triumphs in 2016/17.

The Swede also played a key role in that season’s victorious Europa League run, but a serious knee injury in the quarter-final triumph against Anderlecht ruled him out of the remainder of the campaign.

The veteran only made seven more United appearances after that and looked set to wind down his career when he moved to LA Galaxy in March 2018, but the striker has flourished since returning to Milan and passed a landmark 500 career club goals earlier in February.

AC Milan, who are second in Serie A, four points behind Inter could welcome back Hakan Calhanoglu in time for the trip to Manchester – although the midfielder is also set to miss out against Udinese and Verona, struggling with a thigh injury as well.

One piece of good news for manager Stefano Pioli surrounds Ante Rebic, who has been cleared of any significant hip problem after limping off against Roma.