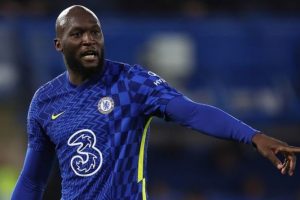 Zinedine Zidane could play an important role to help Chelsea keep hold of Romelu Lukaku. The Frenchman is expected to take over at Paris Saint-Germain in the summer and will likely have an influence on whether or not Kylian Mbappe decides to leave.

With a huge reputation in the modern game, the former Los Blancos midfielder has been linked with every large-scale vacancy in recent times, including the Manchester United vacancy upon Ole Gunnar Solskjaer’s sacking.

Reports by Marca however suggest he will become PSG manager in the summer once Mauricio Pochettino departs the club.

PSG face a big summer ahead with Mbappe potentially departing for Real Madrid. The French giants have already drawn up plans for life after the striker and have earmarked Lukaku as a target, as per a report in the Sun.

However, Mbappe is known to idolise Zidane and may be tempted to stay at PSG if the former Real Madrid star ends up succeeding Pochettino.

That could have a huge knock-on effect for Chelsea, with PSG likely ending their interest in Lukaku if Mbappe stays at the club.

Lukaku’s Chelsea career was recently in doubt after he expressed a desire to return to Inter Milan following a disagreement with Thomas Tuchel’s tactics.

However, the two have since mended relations and Lukaku started their Carabao Cup semi-final win over Tottenham in midweek.

Speaking recently about Lukaku, Tuchel said: “For me it is important to understand the overall picture we have.

“Does it reflect his overall mood and attitude? Absolutely clear no.

“Was the intention to create trouble or leave the club, put pressure on the coach? Absolutely not.

“Of course he should have known better, that’s why we have to clean it and clear the air together.

“We need to be adult enough and mature enough to accept an apology and have a clear head to prepare the upcoming matches.

“He is very aware of what happened and what he created and he feels the responsibility to clean the mess up – maybe we will have a bit of smell from it of course, but he can handle it and he has no other choice.”