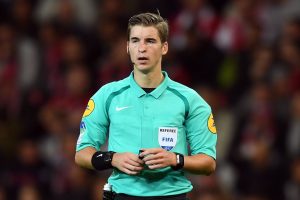 François Letexier has been confirmed as tonight’s referee

The 32-year-old is a regular official in Ligue 1 and took charge of Liverpool’s 1-1 draw at FC Midtjylland in the Champions League group stages last season.

The fixture featured a number of controversial refereeing decisions, however, with Jurgen Klopp’s side having an 89th-minute winner ruled out after Sadio Mane was ruled to have handled the ball in the build up to Takumi Minamino’s late winner.

The incident was one of three lengthy VAR reviews in the match, with Klopp stating afterwards: “I used to be one of the people who said VAR is a good idea. I’m really not sure I would say that again to be honest.”

Letexier took charge of his first World Cup qualifier earlier this month as he officiated Greece and Kosovo’s 1-1 draw.

Manchester United travel to Switzerland buoyed by Cristiano Ronaldo’s return to the club. The 36-year-old scored twice on his Old Trafford homecoming on Saturday and Ole Gunnar Solskjaer’s side are top of the Premier League on goals scored following three wins and a draw in their first four matches.

Solskjaer may rotate his side tonight, with Jesse Lingard in line for a start.

Young Boys defeated Swiss leaders FC Zurich 4-0 at the weekend and have eight points from their opening five matches of the season under former Huddersfield and Schalke manager David Wagner.