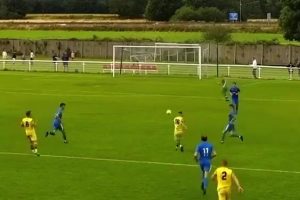 One Wythenshawe Town player has gone viral after his sensational strike from near his own halfway line left the goalkeeper absolutely helpless.

Jordan Burton saw his name up in lights during a North West Counties League clash in their first game of the new season. And they might have already landed the Puskas Award.

That is after a goal that Dejan Stankovic would have ben proud of has done the rounds on social media with the Wythenshawe Town Twitter account absolutely in love with the sensational strike. And even the goalkeeper could only applaud after being caught out of his net with the effort.

After the goalie came out of his box to clear the ball, alarm bells rang when it dropped straight to an opposition player as he raced back to his line. But the strike on the ball from just inside their half was so effortlessly clean, spinning through the air before flying straight into the top corner that caused left spectators speechless.

Think back to when former Inter Milan star Stankovic pulled off a halfway volley after Manuel Neuer – at Schalke at the time – raced out of his half to head clear a ball.

It fell straight to the Serbian, who pulled off one of the most remarkable Champions League goals in recent memory.

Well, this goal from Burton falls into that category – even if the pitch was probably waterlogged and covered in dog excrement. Perhaps even more remarkable is the fact this is not the first time the Wythenshawe star has seen one of his goals go viral.

Two years ago, a free-kick of his from about 40 yards out flew into the net as his teammates looked dumbfounded. And to celebrate, he pulled off an almost-intact 'Siuuu' celebration that Cristiano Ronaldo would have been proud of.

If there are any Premier League clubs looking, it might be time that this Burton lad is snapped up before the likes of Real Madrid and Barcelona get involved.