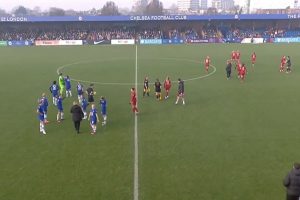 Chelsea's Women's Super League match with Liverpool was called off on Sunday with less than 10 minutes played.

The WSL clash kicked off at 12.30pm as Chelsea looked to extend their lead at the top of the table with a home tie against Liverpool but the referee was forced to pull the players off the pitch due to their own safety. The ref made the call with just seven minutes on the clock despite previously passing the pitch as fit to play.

Ahead of the game, Chelsea players warmed up in shirts that paid tribute to former Chelsea men's player Gianluca Vialli after his death. Once the ball was kicked though, the ref noticed it was far too icy for the players to be playing at Kingsmeadow, despite fans making the trip from Merseyside down south.

As the game was stopped, Chelsea boss Emma Hayes was seen chatting to the referee who then took the decision to send both sides down the tunnel before boos erupted from the crowd. At first, it was unknown whether the stoppage was temporary before it was made clear the match was off.

What's the latest you've seen a match called off from a frozen pitch? Let us know in the comments section below

Speaking after the postponement, Emma Hayes told the BBC: "You could see from the opening minutes that it was like an ice rink down the sides. Matt Beard was upset that it even got to point and he's right.

"It's not for managers to decide if it's on – it's up to the FA and officials. We have to say to ourselves that it's time for undersoil heating. We've got to take our game seriously. Yes, we can have our blowers and pitch tents but it's not enough.

"The game should never have started. Everyone wanted to get the game on but when you have got emotions of teams wanting or not wanting to play, that's when you need a decision from above. The FA weren't here – they need to be making the decision."

Liverpool manager Matt Beard told the BBC: "I'm just gutted for our fans because they have set off at 5am this morning to come down when it could have been postponed at 9.30am because the pitch wasn't safe."