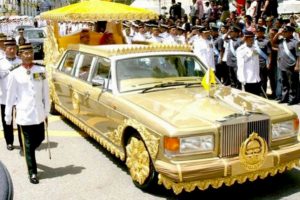 Hassanal Bolkiah's car collection is worth more than the entirety of Manchester United.

The current Sultan and Prime Minister of Brunei, whose nephew, Faiq Bolkiah, had stints at Chelsea and Leicester City, has a vehicle collection reported to be £4billion.

Meanwhile, the Red Devils, among the world's most valuable clubs, is valued at around £3.08billion.

Bolkiah, who has an estimated net worth of £13billion, has in his vast garage over 600 Rolls Royces, over 570 Mercedes-Benz, over 450 Ferraris, and over 380 Bentleys among others.

His nephew Faiq is a professional player who’s considered to be the richest in the world.

The 23-year-old, who recently signed for Thai club Chonburi, went viral recently after a stunning assist of his side against Nong Bua Pitchaya.

The midfielder made a superb dribble on the right flank, beating his man before hitting in a superb cross into the path of, Byung-Soo Yoo a former Russian Premier League player who finished the job.

Can anyone match this collection? Tell us in the comments section.

They went on to lose the game 3-2 thanks to a late goal by Tassanapong Muaddarak, but it put the youngster into the public consciousness once more.

Faiq signed for Leicester in 2016 but never actually played for the Foxes. He left for Portugal’s Primeira Liga to play for Maritimo, who struggled there as well.

The youngster was educated in England and signed for Southampton as an academy player in 2009, but it wasn’t long until he ventured to the Midlands.

Faiq is eligible to represent America and Brunei, but he opted for the latter, playing for his nation at under-19 and under-23s level.

An article from 2011 in Vanity Fair said that the player’s father – the playboy Jefri Bolkiah – “has probably gone through more cash than any other human being on earth.”