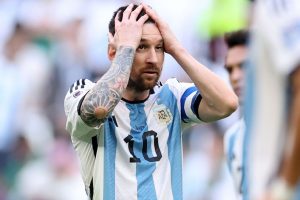 Argentina saw their 2022 World Cup campaign get off to a catastrophic start as Lionel Messi & Co. suffered a shock 2-1 defeat against Saudi Arabia in the opening game of Group C.

Unbeaten in their previous 36 games heading into the tournament — a streak that stretched back to July 2019 and was just behind Italy’s world record 37-game run — Argentina took the lead after just 10 minutes when Messi converted from the penalty spot. That looked like being the first of several goals for the Albiceleste who dominated and had several goals ruled out for offside.

However, the Saudis fought back and eventually took the lead shortly into the second half via two quick-fire goals from Saleh Al-Shehri and Salem Al-Dawsari — the latter an early contender for goal of the tournament. In yet another game that stretched well beyond the 100-minute mark, Herve Renard’s side then held on for more than 40 minutes as wave after wave of Argentine attacks were resiliently thwarted.

The final whistle sparks scenes of elation inside the Lusail Iconic Stadium as Argentina surrendered their long unbeaten run to an unfancied side outside the top 50 in the FIFA world ranking.

Argentina can perhaps take some heart from the fact that they’ve lost their first game at a World Cup before, recovered and eventually gone on to make the final (more on that in a moment). But the loss to Saudi Arabia in Qatar goes straight into the annals of the most seismic upsets in tournament history, along with these other shock results.

It might not seem like a particularly major shock by modern standards, but the result of this group stage match in Brazil is still cited as one of the biggest, if not the biggest, upsets in World Cup finals history. England’s team boasted several huge stars of the day in Tom Finney, Stan Mortensen and Billy Wright while the US XI was a loose collection of unfamiliar semi-pros who had only played with each other once beforehand. The clash was expected to be a formality for England but the only goal of the game came from Joseph Gaetjens, who deflected a shot from Walter Bahr into the back of the net.

The day that Pak Doo-Ik wrote his name into football folklore forever, and at Ayresome Park in Middlesbrough of all places. While Boro’s old ground is long gone, a bronze cast of Pak’s boot still remains within the housing estate that replaced it in tribute to the forward who dumped a star-studded Italy out of the 1966 World Cup. North Korea went on to face Portugal in the quarterfinals but ultimately came unstuck against the great Eusebio, who scored four goals and provided an assist for the other in a 5-3 win. Meanwhile, the Azzurri were left to creep back home under the cover of night but still managed to find themselves faced with a volatile “welcome” on their return: irate fans pelting the team with tomatoes as they emerged through Genoa airport.

There have been other big World Cup upsets involving Italy, such as losses to Republic of Ireland in 1994, to 2002 co-hosts South Korea and the playoff defeat to North Macedonia earlier this year that blocked their road to Qatar, but the humbling at the hands of North Korea remains their nadir.

A grisly, physical duel that is perhaps best remembered for Benjamin Massing’s infamous hatchet tackle on Claudio Caniggia — a “challenge” emblematic of the rough tactics on display throughout the game. Argentina, reigning World Cup champions, were once again led by the mercurial talents of Diego Maradona and the Albiceleste were heavily backed to win again at Italia ’90.

By contrast, Cameroon were 500-1 outsiders, but that didn’t stop the Indomitable Lions from giving absolutely everything they had to topple the big shots, despite being reduced to nine men by the end of play. The tactics worked — just — as Francois Omam-Biyik scored the decisive goal with a header in the 67th minute to snatch the hardest-fought of wins.

Despite losing their first game, Argentina did rally to reach the final, only to lose out against West Germany by a single goal in Rome.

France found themselves on the wrong end of one of the most memorable upsets in World Cup history when they were beaten by Senegal in the opening fixture of the 2002 finals. Papa Bouba Diop slid in to score the only goal of the game after El Hadji Diouf broke through Les Bleus‘ defensive line, leaving the startled reigning champions wondering what had just happened.

The defending champions never recovered, with Thierry Henry getting sent off in a 0-0 draw with Uruguay before a 2-0 loss to Denmark guaranteed them an early return home. It was a similar story eight years later when, with the camp marred by in-fighting, 2006 runners-up France were eliminated at the group stage after losses to Mexico and hosts South Africa.

Having become accustomed to winning every tournament they entered, reigning world and European champions Spain were given a stern reality check in Brazil when Netherlands ran riot in Bahia. The score was level at half-time but a brilliant second-half performance from the Dutch saw them come from a goal down to crush Vicente del Bosque’s men with a flurry of goals, including an inspired long-range diving header from Robin van Persie.

With Spain seeking to win their fourth consecutive major international trophy, the defeat must surely rank as their most deflating on record (especially being the first time they’d conceded five goals in an international match since 1963). However, Gerry Armstrong would probably argue otherwise, as it was his goal that earned plucky Northern Ireland their famous 1-0 shock win against La Roja at the 1982 World Cup in Spain.

While getting beaten by neighbours Uruguay on home soil in the final of the 1950 World Cup is a strong contender to be Brazil’s most painful international embarrassment of modern times, the whole world was not watching it live as they were 64 years later. The year was 2014, the stadium was the Estadio Mineirao in Belo Horizonte, and Germany were the team responsible for dumping the Selecao from the semifinals of their own World Cup in the most brutal manner imaginable.

Even before the match kicked off, the home side looked too emotional for their own good as they paid prematch tribute to star player Neymar, missing with a back injury sustained in the quarterfinal win over Colombia. They were unable to focus on the task at hand, allowing Thomas Muller to open the floodgates after just 11 minutes and finding themselves 5-0 down at half-time.

Germany were reigning world champions when they were knocked out of the 1994 World Cup quarterfinals by Bulgaria — a game that was possibly their lowest moment on football’s biggest stage, until 2018.

Low was at the helm as Die Mannschaft — who were once again defending their world title — went crashing out of the 2018 World Cup at the group stage following a devastating and dramatic loss to South Korea, who scored both of their goals after the 90-minute mark. Son Heung-Min rolling the ball into an empty net with goalkeeper Manuel Neuer stranded at the other end of the pitch was an unforgettable moment.