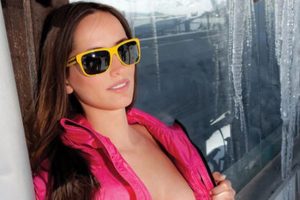 Jackie Chamoun, who is married to World Cup winner Christian Karembeu, once caused quite a stir by posing naked before a Winter Olympics in which she competed.

The Lebanese alpine skier took part in a photo shoot which resurfaced in the build-up to the 2014 Winter Olympics in Sochi where she was due to compete in both the slalom and the giant slalom.

The photos, which were in fact from 2011, came from behind the scenes of an Austrian calendar that she said were not supposed to be published.

Ahead of the 2014 games, she wrote: "The video and photos that you are now seeing are part of the making of the preparation. It wasn't supposed to go public.

"I want to apologise to all of you, I know that Lebanon is a conservative country and this is not the image that reflects our culture,' she added.

"Now that I’m at the Olympic Games … All I can ask to each of you who saw this, is to stop spreading it, it will really help me focusing on what is really important now: my trainings and race."

Who is the most famous WAG in the world? Tell us in the comments section below

She went on to finish 47th in the slalom with support for her plight coming in the form of a protest dubbed 'Strip for Jackie'.

Fast forward to 2017, Chamoun tied the knot with former France star Karembeu who picked up World Cup glory back in 1998 under Aime Jacquet having started the final against Brazil.

Karembeu, a former Real Madrid and Middlesbrough midfielder, shares a daughter with Chamoun, with the pair keeping fans updated on social media.

Karembeu, who was part of the ITV broadcast team for Euro 2016, has been the sporting director of Olympiacos since back in 2013, overseeing seven Super League triumphs.

Speaking ahead of the 2022 tournament in Doha, Karembeu has predicted a clash of PSG team-mates in the final on December 18.

He said: "I’ve said it before, the final will be between Argentina and France. It will be Messi v Mbappe."