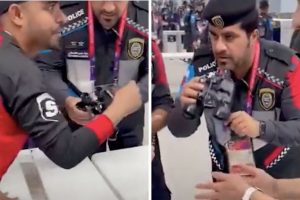 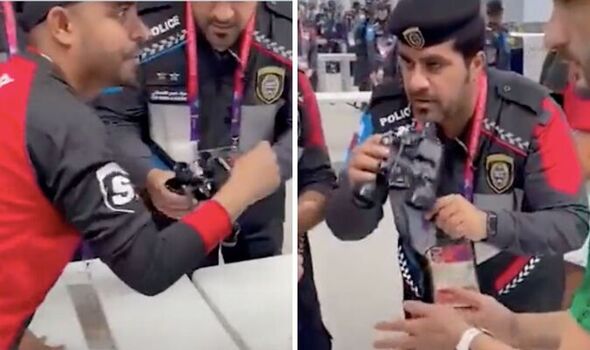 One sneaky Mexico fan was stopped in his tracks after he tried to sneak alcohol into a World Cup stadium in Doha. Qatari officials have implemented a strict ban which prohibits the sale or consumption of alcohol in all eight of their World Cup stadiums – a decision that was made less than 48 hours out from the opening fixture between Qatar and Ecuador.

But one cheeky supporter did not let the ban stop him from attempting to bring some beer into the stadium with him.

Video footage shows the Mexico fan pleading his innocence as he is questioned by a policeman in Qatar on his way into the stadium.

The clip shows the police officer rummaging through the fan’s binocular pack – where alcohol has been cleverly stored in disguise.

The supporter is very animated as he protests his innocence but it appears the policeman was having none of it.

Ecuador fans, who were denied the chance to have a beer at the opening fixture, made their feelings clear during the opening spectacle as they chanted “we want beer” from the stands.

Alcohol is not entirely banned in Qatar but it is illegal to drink it in the streets and to be drunk in public is also frowned upon.

There are even specific zones for fans to sober up after they’ve enjoyed a few drinks, an area that is closely monitored by the authorities.

On average, fans will have to pay around £11 per pint in Qatar while alcohol-free beer is also served.

FIFA sponsor Budweiser were dealt a contractual nightmare last week when it was confirmed that alcohol could not be sold at the eight World Cup stadiums.

The American-lager company had already built a series of marquee stands and stools that were ready to sell the beer on sites around Doha.

But they had to be packed down in correspondence with the official FIFA ruling following consultation with Qatari officials.

Budweiser have since announced via their Twitter account that the winning nation at the World Cup will get the leftover beer.

They said: “New Day, New Tweet. Winning Country gets the Buds. Who will get them?”

Budweiser had previously mocked Qatar’s decision to ban alcohol in World Cup stadiums by tweeting: “Well, this is awkward…” The humorous post was later deleted.