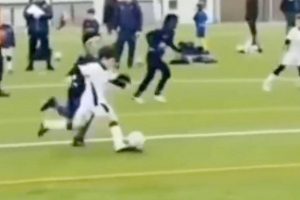 A child has been labelled "Lionel Messi's son" after footage of the youngster scoring a stunning solo goal appeared on social media.

The footage shows the young player collecting the ball deep in their own half before dribbling past three opponents with ease as they attempt to tackle him. After finding some space in the opposition half, the boy then fires a left footed shot past the goalkeeper and into the top corner before celebrating.

Footage of the goal was posted on social media over the weekend, with some Twitter users claiming that the goalscorer was Messi's six-year-old son Mateo.

The Paris Saint-Germain forward has three sons with wife Antonela Roccuzzo, with Mateo the middle child between eldest Thiago and youngest Ciro.

One user even wrote "Mateo Messi. No DNA test required" after posting footage of the goal on Twitter, although fans were quick to pour water on the claims it was the seven-time Ballon d'Or winner's son.

“That’s not Messi’s son but the kid is very talented whoever he is," commented one fan. Another pair of fans also added: “That’s not him lol" and “No way is that really his kid.” The video has now been proven not to be showing Mateo Messi, with one Twitter user uploading the original clip and writing: “This is literally a youth player from Anderlecht.”

It turns out that the footage of the goal originates from a TikTok uploaded by Belgian side Anderlecht on their official account back in January.

Anderlecht captioned the post "Our academy > your academy", with the video accompanied by commentary from one of Messi's solo goals from the past.

The original video has been viewed more than 444,000 on the video sharing platform and has amassed over 30,000 likes since being uploaded five months ago.

Messi is set to return to action with PSG next season, following his debut campaign with the French giants in 2021/22, which ended with the club winning their 10th league title.

The 34-year-old winger managed to score 11 goals and provide 15 assists in his 34 appearances across all competitions during his first senior season away from Barcelona.