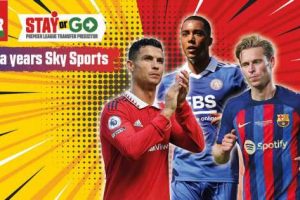 You can win a year's Sky Sports subscription this week with our new Stay or Go transfer game.

Fans have the opportunity to win the prize by taking part in the game, which requires supporters to select whether a player will stay at their current club or join to a new one before the end of the transfer window. If all 10 answers selected are correct when the window closes on September 1, then you will be entered into our prize draw.

A host of stars from the Premier League and across Europe have been chosen, including the likes of Leicester playmaker Youri Tielemans, Manchester United star Cristiano Ronaldo and Barcelona midfielder Frenkie de Jong. Liverpool's Roberto Firmino and Tottenham Hotspur midfielder Tanguy Ndombele are also included, as well as Chelsea winger Hakim Ziyech.

Will Newcastle United target James Maddison remain at Leicester? And will Maddison's team-mate Wesley Fofana also be on his way amid interest from Chelsea? Former Arsenal forward Pierre-Emerick Aubameyang is also a part of the competition, with his Barcelona future currently unclear and Chelsea linked.

The final player included is Lazio midfielder Sergej Milinkovic-Savic, who has often been linked with Manchester United, and could finally be on the way to Old Trafford.

The competition closes at midnight on August 21, 2022, so get your selections in now to stand a chance of winning the prize.