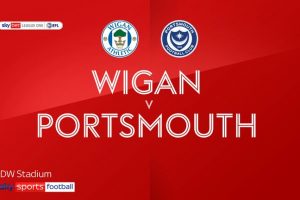 Portsmouth strengthened their position in the Sky Bet League One play-off places with a hard-fought 1-0 victory at relegation-threatened Wigan.

Danny Cowley’s men recorded a fourth win on the spin thanks to a rocket from Andy Cannon, just 36 seconds after entering the fray as a half-time substitute.

Pompey had other chances to score, with Wigan goalkeeper Jamie Jones doing brilliantly to keep out Ryan Williams with a fine save in either half.

At the other end, Wigan enjoyed the majority of the ball but were unable to do much with it.

The closest they came was through Curtis Tilt in the first half, but the centre-back’s goalbound effort hit Jack Whatmough almost on the goalline, with the ball being diverted behind for a corner.

And the Latics suffered a potentially crippling blow in the closing stages, with star man Callum Lang having to be helped off the field after suffering a bang to the head in a collision with Pompey defender Sean Raggett, who also had to go off.