Why Liverpool players held back celebrations after scoring against Aston Villa 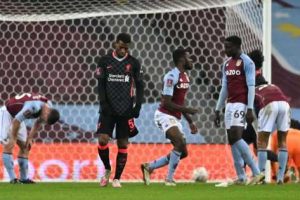 Liverpool fans may have noticed their beloved stars barely reacting to scoring against Aston Villa in the FA Cup.

Georginio Wijnaldum in particular looked almost nonplussed when he put the visitors back in front at Villa Park.

There were a couple of high-fives for Sadio Mane 's second goal but again the celebrations were muted.

It could be thought that any lack of a reaction was down to the Liverpool players playing against a third-string Villa side full of youngsters.

But it's actually because all players have been told to tone down their celebrations, as pointed out by BT Sport commentator Ian Darke at the time.

Of course, Darke was referring to the reminder the Professional Footballers' Association (PFA) had sent out – advising footballers against hugging and keep their distance where possible when a goal is scored.

"We've sent a message to all our members saying, 'you have done a great job, you've kept the game going and you deserve a lot of credit, but it's important you keep to the protocols," PFA chief executive Gordon Taylor told The Times .

"Always abide by what you're being told by doctors and medical staff with regard to the protocols about keeping your distance and the hygiene that's required.

"I understand with the celebration of a goal it's difficult to just put the ball in the back of the net and act as though nothing has happened.

"It's that adrenaline rush… that's what the game is all about, but that's part and parcel of the process, so they'll be reminded."

It's of course a message that's been sent to all professional footballers so fans can expect to see more of the same over the coming weeks.