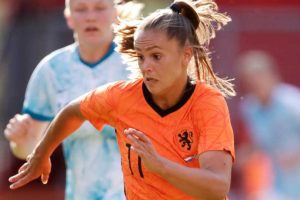 The U.S. women’s national soccer team is the overwhelming favorite to win gold for the fifth time in seven women’s Olympic soccer tournaments.

U.S. sportsbooks have the USWNT between -165 and -185 to win, when it’s rare for any team to be at minus money in the lead-up to an international soccer tournament. There’s no denying the U.S. women are dominant — they are unbeaten in 44 straight matches entering the Olympics — but tournament soccer can be unpredictable, especially in the single-elimination knockout rounds. The USWNT found that out during the last Olympics in 2016 when it crashed out in the quarterfinals after a penalty-kick shootout against Sweden.

And with the growth of women’s professional soccer happening around the world, other countries are increasingly competitive. For that reason, there will be plenty of interesting ways to play the odds markets during the Olympic women’s soccer tournament.

Below are the futures as they stand heading into the women’s Olympic soccer tournament, according to four U.S.-based sportsbooks.

After the USWNT, the Netherlands are deemed the next most likely to win the gold (+500 to +650). The Dutch women were 2019 World Cup runners-up after losing the final to the USA and the two nations could be on a collision course for a repeat final in Tokyo. If both teams win their respective groups, as the oddsmakers project them to, then they could only meet in the final. In that case, a Netherlands futures bet would also present a hedging opportunity.

The toughest match on the Netherlands’ projected path to a final would come in the quarterfinal round. Should the Dutch finish tops in Group F (Brazil, China, Zambia), that would set up a matchup against the second-place team in Group G, likely to be Sweden (if the USA finish first). The Netherlands needed extra time to beat the dangerous Swedes in a 2019 World Cup semifinal, but as teams begin to tire in the knockouts with sapping weather conditions expected, the Dutch possession game could prove an edge in that showdown.

Great Britain, Brazil, Canada and a new-look Japan team are in the next tier of contenders dreaming for a shot at Olympic gold, but the USA and Netherlands are simply a cut above and it will take multiple upsets to bump both off the top of the podium.

Teams to win a medal

U.S. sportsbook PointsBet has odds on teams to win one of the three Olympic soccer medals, and unsurprisingly, the USA and the Netherlands are at minus money.

While Canada (+600) has won bronze in the last two editions, the team’s scoring struggles are real (six goals in seven games in 2021), despite fielding 38-year-old legendary forward Christine Sinclair (below), who is the world’s all-time goals leader, men or women. If the Canadians can show they can manufacture dangerous opportunities in their opener against Japan, the medal future could be worth a flyer.

Host Japan (+400) might also be an intriguing play to win a medal and that first match against Canada will set the tone for what to expect. The Japanese have been a growing force on the international stage, advancing to medal-round matches in 2008 and 2012 and making an appearance in the 2015 FIFA World Cup final.

Although it missed out on qualifying for the 2016 Games, Japan has been building a young core that gained experience at the 2019 World Cup, where it was knocked out on a 90th-minute penalty by eventual finalist Netherlands in the Round of 16. The Japanese, who have scored 28 goals in five matches this year, could be primed for another memorable run.

At the time of publication, three sportsbooks had published odds on group winners.

The odds show Group E to be the most tightly contested between favorite Great Britain and host Japan. Japan finished behind England in Group D at the 2019 World Cup thanks in part to a 2-0 England win in a head-to-head matchup that was closer than the final result indicates. The comparison applies given that 19 of Team GB’s 22 players at the Olympics are English, but Japan has since made strides and star Mana Iwabuchi’s recent months of playing club football in England will not hurt when the teams meet in the second group match.

If Canada (+275 to +450) can find its scoring groove, then it can also be a legitimate threat to win Group E. Great Britain and Japan will not have an easy time breaking through the Canadian defense, and if Canada’s offense can get the lucky bounces and do some damage on set pieces, then the Canadians could pip both favorites.

Among U.S. sportsbooks, BetRivers is offering odds on the top scorer in the women’s tournament, with Australia’s Sam Kerr (+600) and the USA’s Alex Morgan (+600) as the co-favorites to win the Golden Boot.

But Kerr and Australia face tough group-stage opposition in the USA and Sweden, which both are strong defensive outfits. Morgan is in a battle for the USA’s starting forward spot with Carli Lloyd, and the USA’s opponents are likely to park the bus, limiting scoring opportunities.

One other name that could instead be appealing: Netherlands starting forward Vivianne Miedema (+700) is a scoring machine with 18 goals in 22 matches for Arsenal last season and 73 goals in 96 all-time matches with the Netherlands. Miedema (above) scored three goals at the 2019 World Cup on 2.6 expected goals.

The Netherlands’ manageable group opponents (No. 7 Brazil, No. 15 China and No. 104 Zambia) and expectations of a deep tournament run give Miedema a pathway to the top of the Olympic scoring table.