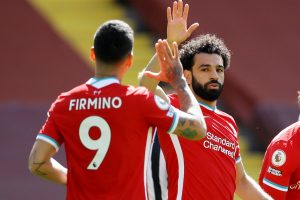 The race for the Premier League Golden Boot is going down to the final weekend of the season.

Leicester City’s Jamie Vardy won the prize a year ago with 23 league goals with the likes of Pierre-Emerick Aubameyang of Arsenal and Manchester City’s Sergio Aguero winners in recent years.

Tottenham’s Harry Kane and Mohamed Salah of Liverpool are battling it out this year with both entering the final day neck and neck at the top.

Should they both finish on the same number of goals, the award will be shared with the number of assists not a tie-breaker per Premier League rules.

The award has been shared twice before, between Dimitar Berbatov and Carlos Tevez in 2011 and in a three-way tie between Kane, Salah and Aubameyang in 2019.

Here are the current standings: