Home » Soccer » When is the Champions League quarter-final draw? Time, TV channel and how to watch

When is the Champions League quarter-final draw? Time, TV channel and how to watch 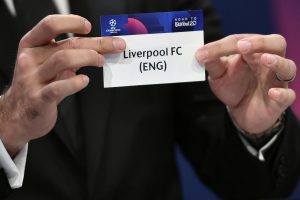 The Champions League quarter-final draw is almost here with the final eight teams in Europe’s most prestigious club competition confirmed.

Holders Bayern Munich remain the team to beat in Friday’s draw, having destroyed Lazio in the round of 16, while Chelsea impressed over Atletico Madrid, justifying the move to replace Frank Lampard with Thomas Tuchel, who has inspired an upturn in form for the Blues..

They will be joined by Premier League rivals Manchester City, with a 4-0 aggregate win over Gladbach, and Liverpool, who had too much for RB Leipzig, with Jurgen Klopp’s side still a formidable opponent despite their domestic struggles.

There will be no seed in this draw, which throws up the potential for some mouthwatering ties.

The pressure will be on Pep Guardiola, who has revealed the expectations from City’s owners to deliver the one trophy that has eluded them.

“Since the first year I arrived they told me that you have to win the Champions League,” Guardiola said after easing into the final eight. “It is always on our shoulders, but I’m not concerned about that. If you deserve it in football, you go through. If you don’t, you don’t. I’m not thinking to get to the semi-finals. I’m thinking to do a good first game and a good second game.

When is the Europa League quarter-final draw? Time, TV channel and how to watch

What will be the legacy of Bayern Munich’s Champions League winners?

Manchester City’s biggest threat in the Champions League? Themselves

“When you are thinking about what you are going to win, you forget what you have to do – analyse the opponent, our shape, the way we want to play, our principles, and trying to do a good game. This is all I am concerned with. But, saying that, I’m more than incredibly impressed and delighted for our players in this tough year for everyone in society, being 14 points clear in the Premier League and in the final of the Carabao Cup and quarter-final of the Champions League and going to play to get to the semi-finals of the FA Cup.

“It is more than winning one quarter-final or one last-16 game. It means that in nine or 10 months every three days you are there and this is the best title you can get. Of course for the prestige for all of us, because we are here to win like all other clubs, we have to try it in the end to lift some titles.”

Here’s everything we know about the draws and how you can watch it on television and online.

When and where is the draw?

The draw is on Friday 19 March at the House of European Football in Nyon, Switzerland and starts at 11am GMT.

How will the draw work?

As mentioned, there is no seeding, which means clubs from the same country can draw each other.

So the free draw will decide the quarter-finals, before each tie is numbered 1–4 to create a path to the semi-finals.

Then there will be a third draw, to decide who will be the ‘home’ side in the final for administrative reasons.

Any restrictions, for broadcast or logistical reasons, will be announced ahead of the draw.

When will the quarter-final and semi-final ties take place?

Is the draw on TV and will there be a live stream?

The draw will be streamed live on Uefa’s website, while BT Sport will also broadcast the draw across their channels, as well make a live stream available on the app.

You can also follow the draw live with Independent Football’s live blog here.