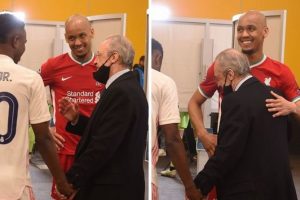 Fabinho smiled and joked with Real Madrid president Florentino Perez in the tunnel after Liverpool’s 3-1 defeat to Real Madrid on Tuesday night. The Brazilian was back on familiar territory in the Spanish capital, playing against the club he once represented back in the 2012/13 season.

It was not to be Fabinho or Liverpool’s night as they were deservedly beaten by the better team.

The Reds turned in a frustrating performance that saw them trail 2-0 at the break before Vinicius Junior added his second of the game to restore the two-goal cushion after Mohamed Salah netted a crucial away goal.

After the game, the 20-year-old Real Madrid winger joined Fabinho and the man who brought him to the club, Perez, for a quick chat.

According to MARCA, Perez highlighted just how much Fabinho’s game has changed since his time with Los Blancos. 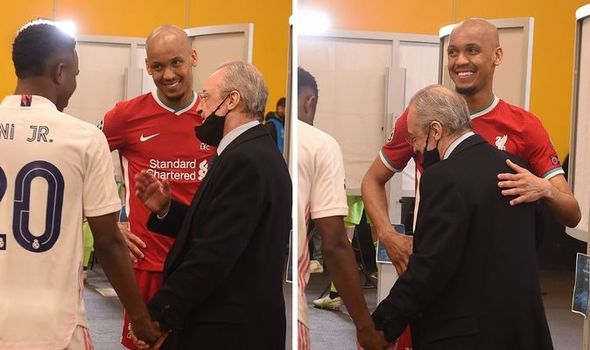 “With us you played as a right-back,” Florentino recalled to the Liverpool defensive midfielder.

To which Fabinho allegedly responded: “Yes, but to play right-back now… What a player you have in Vinicius.”

Fabinho joined Real Madrid on loan from Rio Ave in 2012 but spent most of his time playing for the Castilla side, where he made over 30 appearances.

He was eventually handed his senior debut by Jose Mourinho towards the end of the season, when he featured from the bench in a 6-2 win over Malaga.

The now 27-year-old would later join Monaco, where he became a key figure, helping the club win the Ligue 1 title and reach the Champions League semi-finals in 2016/17.

Right-back was also his preferred position in his first few years at the club, before he eventually moved into central midfield.

Alberto Toril, his former coach at Real Madrid Castilla, recently admitted that Fabinho never quite looked like a midfielder despite now being recognised as one of the best of his ilk in the world.

“He was very shy, but you could immediately see his potential as a player,” Toril told Goal. 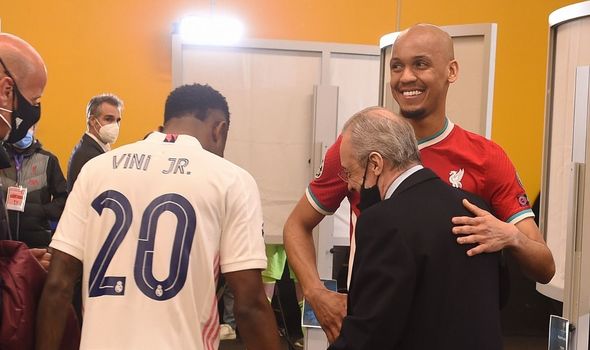 “When he arrived, he occupied a somewhat strange position for the type of footballer he was. He was 1.90m (6ft 2in), but he was a right-back, which is unusual, no?

“He played on occasion as a centre-back, but never as a midfielder. At the time he just wasn’t seen as a midfield player, although we were not sure where his best position would be in the future.”

Liverpool have it all to do in next week’s second leg if they are to reach the semi-finals of the Champions League.

The Reds will have to do it without their twelfth man, who have helped them execute so many famous nights at Anfield including the stunning comeback against Barcelona in the 2018/19 semi-finals.