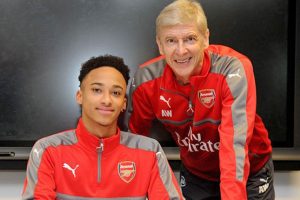 Sometimes, there is no fairytale ending to the fairy story, only one of settling into the lower leagues of English football.

It must have been nothing short of a dream though for Cohen Bramall who went from playing in the Northern Premier League for Hednesford Town to actual Premier League giants Arsenal in the blink of an eye.

Bramall was working full-time in a Bentley car factory at the time, but faced redundancy, before being handed the opportunity of a lifetime by the Gunners.

The Crewe-born left-back had been on trial with Sheffield Wednesday before he impressed at the same stage with Arsenal.

And while Crystal Palace were also said to be keen on Bramall, it appears that Arsene Wenger had no doubts that the then 20-year-old could cut it at the top level.

A two-year deal and a pretty minimal £40,000 fee was all it took to complete the switch.

And having invited him to take part in a first-team training session, Wenger then made some pretty ambitious comparisons between Bramall and with one of his coveted ‘Invincibles’.

“Cohen Bramall has signed for us” Wenger told beINSPORTS.

“He’s an exceptional physical talent. I don’t think he’s ready, today, to play in Premier League but he has similarities to a young Ashley Cole."

However, one unsuccessful loan move at Birmingham and an uninspired spell with the club's under-23 side, and it was clear that Bramall would not be following in the footsteps of 107-time capped Cole.

He was sent on his way in 2019, joining League Two’s Colchester United, where he even scored his first professional goal with a free-kick against Carlisle.

And earlier this month, the 24-year-old moved up a level to Lincoln City, who are battling it out for promotion to the Championship.