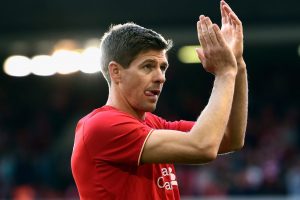 Liverpool legend Steven Gerrard has clinched his first league title as a manager after Rangers were crowned Scottish Premiership champions on Sunday afternoon.

The Ibrox club have got their hands on a first title for 10 years in remarkable fashion, avoiding defeat in 32 league matches and taking 88 points out of a possible 96 – while also conceding a mere nine goals.

Gerrard has emerged as one of the most talented young coaches in British football, meaning the inevitable links with former club Liverpool have started doing the rounds once more.

Reds fans are desperate for their beloved ex-captain to return as manager one day, and with Jurgen Klopp currently stewarding a nightmare Premier League title defence an opportunity to take the Anfield reins may not be too far away.

However, Gerrard has remained realistic about his chances of replacing Klopp on Merseyside when asked about it in recent years.

In January of last year, the former England midfielder responded to Klopp’s claims that he could succeed him and said on Jamie Carragher’s Greatest Game podcast: “I wouldn’t take the Liverpool job just because of what Jurgen said. I am mature enough to know that I have to be ready for the Liverpool job.

“Just by Jurgen saying it, it’s very flattering because of who he is, and there is a lot of people out there that naturally think that if Jurgen goes in a year or two years’ time, I am next. I don't [think that] and there's a couple of reasons behind it.

“If I stay at Rangers for another two, three or four years I am okay – it means I am doing something right and happy.

"I am in no rush to try and jump, I am not looking over the fence at anything. I am proper content. If Jurgen stays at Liverpool for another four or five years, brilliant.”

Gerrard was also quizzed on becoming Liverpool manager back in December, to which he provided an equally coy response.

“Would I love to be the coach of Liverpool one day? Is it a dream? Of course,” he said. “It’s a club that means everything to me but we’ve one of, if not the best, managers in the world who has been absolutely incredible since he came through the door.

“And the success he’s delivered in the last couple of years means that Liverpool are in a fantastic place. Long may that continue.

“I’ve still got ex-team-mates playing in the team and that’s where it is. There’s nothing else to really discuss on it.

"Just because I was a good player for Liverpool and had the career I had there, doesn’t necessarily mean you’re next in line to be manager.

“If one day that job ever becomes available, there will be a queue a mile long, full of top-class managers. It doesn’t mean you’re the best person for the job.”