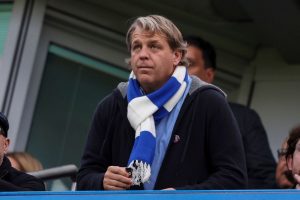 New Chelsea ace Mykhailo Mudryk has penned a bumper £97k-a-week deal at Stamford Bridge, which is remarkably not due to expire until the beginning of the 2030/31 season.

By then, the Blues starting XI will inevitably be vastly different to the one Graham Potter names to face Liverpool in the Premier League on Saturday (January 21).

46-year-old Thiago Silva will surely have retired, Callum Hudson-Odoi will be 30 and may have finally secured a move away from west London while American owner Todd Boehly might even have secured plans to move to a brand new 60,000-seater stadium in Earl's Court.

Also landing Benoit Badiashile, Andrey Santos and David Datro Fofana for a combined £61m, the LA Dodgers co-owner has already shown his mettle in the market, as he aims to build a young squad capable of challenging Arsenal and Manchester City for the Premier League title.

HAVE YOUR SAY! Disagree with our 2030/31 Chelsea line-up? Let us know in the comments section.

With Kepa Arrizabalaga and Edouard Mendy well into their 30s by the time the 2030/31 season starts, youngster Gabriel Slonina gets the nod in between the sticks.

He returned to Illinois to complete the remainder of the 2022 season, making his debut for Chelsea under-21s against Wolves last Friday (January 13).

Already a full-fledged England international at 23, Reece James will still be an integral part of the Blues matchday XI by the time 2030 comes around with breakthrough star Lewis Hall making the left-spot his own following the departures of Ben Chilwell and Marc Cucurella.

Levi Colwill provides defensive cover at both left-back and centre-back but misses out on a spot in the starting line-up with Benoit Badiashile partnering compatriot Wesley Fofana in the heart of the defence.

Jorginho and N'Golo Kante might not last beyond this summer never mind by 2030 and, unless Boehly dives deep into his pockets once more, Trevoh Chalobah is the likely candidate to step up into the role of protecting the back four.

The former Ipswich loanee has matured into a valuable versatile player for Potter's side, popping up at right-back or centre-back and a defensive-minded midfield role is not out of his remit.

Elsewhere, the exciting Carney Chukwuemeka and the experienced head of Mason Mount complete the Blues' three-man midfield. Conor Gallagher and Andrey Santos provide depth and creativity from the bench. Finally solving Chelsea's striker curse, Armando Broja leads the line after proving his worth under Graham Potter, flanked on either side by Mykhailo Mudryk and Champions League hero Kai Havertz.

David Fofana and Christian Pulisic with one of Joao Felix/Christopher Nkunku could even make a case for an alternate forward line.