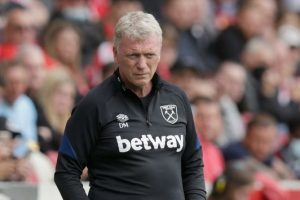 The most expensive signings in Premier League history

West Ham United are eyeing a busy end to the summer transfer window with three new signings potentially in the pipeline, according to reports. David Moyes will want to add to his squad ahead of a busy season, including Europa League football on top of domestic duties.

Moyes guided West Ham to a fantastic campaign last time out, with the club finishing sixth in the Premier League.

With the high finish comes the added expectations in this season’s Europa League, in which the Hammers will enter the group stage.

However, Moyes’ squad is paper-thin, with less than a week left until the 2021/22 season gets underway.

Fans should expect new incomings before the August 31 transfer deadline, though, if recent reports are accurate.

Moyes is ‘desperate’ to provide injury-prone frontman Michail Antonio with competition, and the 23-year-old is a long-standing target in east London.

Jovic is out of Carlo Ancelotti’s plans at Real this season, with at least three German clubs also eyeing his signature.

West Ham may also face a duel with Premier League rivals Manchester United, who have been in talks with the Serb’s camp over a move to Old Trafford.

Meanwhile, the Hammers are edging closer to completing a deal for Fiorentina centre-back Nikola Milenkovic.

The 23-year-old is set to arrive at the London Stadium for a fee worth around £14million once issues regarding agent fees are resolved.

Eurosport’s report claims that after Milenkovic, West Ham are also still hoping to find a breakthrough in talks for Chelsea defender Kurt Zouma.

The Blues centre-back is keen on switching across the capital, but his personal term demands are currently presenting a barrier in discussions.

If West Ham can complete deals for all three players, Moyes’ squad will be in much stronger shape for the remainder of the season.

The Irons won’t be in the Europa League to make up the numbers and will eye a strong campaign on all fronts.

Acquiring reinforcements at both ends of the pitch will only help do precisely that.