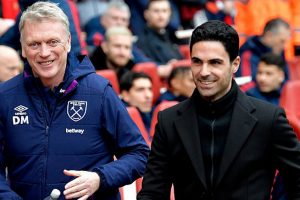 West Ham are keeping tabs on Eddie Nketiah’s situation at Arsenal ahead of a potential move.

The young striker is on David Moyes’ radar as he searches for a new goalscorer at the London Stadium.

Across the capital, Nketiah is in need of more regular game time.

The 21-year-old has not been prioritised by Mikel Arteta of late, with Alexandre Lacazette, Pierre-Emerick Aubameyang and Gabriel Martinelli used more often by the Spaniard.

Nketiah has just 18 months left on his contract, meaning his long-term future is unclear.

The London Evening Standard say West Ham are keen to know if a deal would be possible this month.

Moyes has money to reinvest as he needs an alternative to injury-prone Michail Antonio up top.

A list of options have been drawn up including long-term target Josh King at Bournemouth.

And they need to bring at least one striker in before next Saturday’s Premier League showdown with Burnley in east London.

West Ham could land Nketiah on a loan deal or permanently depending on Arsenal’s stance.

It is felt a sale this month would be more appealing of the two for the Gunners given his contract running down and his value dropping as a result.

A permanent deal would also mean Arsenal could reinvest that money this month.

A creative midfielder is desired by Arteta, with Mesut Ozil’s Gunners career coming to an end imminently.