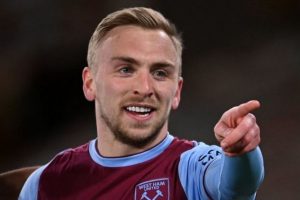 Jarrod Bowen: All you need to know about Liverpool target

Liverpool have reportedly identified West Ham’s Jarrod Bowen as a surprise target but the Irons aren’t keen on the idea of selling their forward, who only joined the club from Hull City last January for a fee of around £22million.

Jurgen Klopp is looking to add yet more attacking reinforcements to his squad despite snapping up Diogo Jota from Wolves last year.

The German is conscious that he could lose both Sadio Mane and Mohamed Salah in January when the duo are expected to jet off to the Africa Cup of Nations.

Divock Origi, Xherdan Shaqiri and Takumi Minamino have all flattered to deceive despite respectable contributions in patches.

Harry Wilson is also expected to leave the club this summer and any cash his exit generates could prove decisive when incomings are concerned.

West Ham are not actively looking to sell Bowen, who is considered an important part of David Moyes’ side as they prepare to embark on their Europa League adventure.

However, The Athletic, who were the first to document Liverpool’s interest, claim the Hammers would consider any offer in the region of £35million.

It’s unclear whether Liverpool would be prepared to step up and pay that at this stage though.

Any deal for Bowen could ultimately hinge on whether Liverpool sell Origi or Shaqiri though.

Both are facing uncertain futures at Anfield but Klopp is conscious that it would be hard to replace either player at their current value.

Talk of interest in the likes of Saul Niguez and Yves Bissouma has been shot down in recent weeks.

Yet while cold water has been continuously poured on rumours, it’s understood Liverpool do have money to spend.

They were recently boosted by the sales of Marko Grujic (Porto) and Taiwo Awoniyi (Union Berlin), who will boost the transfer kitty.

There has also been some suggestion Harvey Elliott could step up after impressing so far in pre-season.

Elliott caught the eye on loan at Blackburn Rovers last season and has returned to Liverpool in impressive physical shape.

He played the full 30 minutes in Liverpool’s 1-1 friendly draw with Stuttgart in Austria on Tuesday.