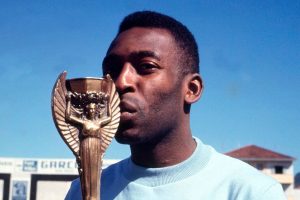 West Brom once signed Pele for just £1million, but he failed to make the cut and joined Northwich Victoria.

But it wasn't the Brazil icon Pele, real name Edson Arantes do Nascimento, who signed for West Brom. Instead it was a Portuguese player named Pedro Monteiro, who was seemingly given the Santos legend's nickname. Pedro joined the Baggies in 2007 for £1m following a prior stint with Southampton, who also paid the paltry sum for the defender.

And although he made 13 starts in the 2007/08 campaign, helping West Brom clinch promotion to the Premier League, he only featured in three of the club's matches the following season, resulting in his move to Falkirk in 2009 on a free transfer.

The centre-back remained in Britain for the remainder of his career, and had a dismal stint with MK Dons where he made zero appearances in 2010, before heading to Victoria in 2011.

Following his spell with the Northern Premier League Premier Division side, Pedro went onto to play for Hednesford Town, Hayes & Yeading United, Havant & Waterlooville, and Totton, where he retired.

Is Pele the greatest player of all time? Let us know in the comments section below

Although Pedro never reached the dizzying heights that Pele attained in his career, he did achieve one feat that the Brazilian didn't by playing in England. Pele spent his career at Santos as he graced the world stage winning three World Cups with the Samba Boys.

However, he did have the opportunity to join Manchester United at one point in his career but he claimed he turned them down to remain with his beloved Santos. The only club who were able to prise Pele away from the Brazilian side was MLS outfit New York Cosmos, and he played for them until retiring aged 36 in 1977. Pele went onto be a global ambassador for the sport before his death at the age of 82 in December last year. After his death, Pele's funeral took place in Santos, and was attended by thousands of people – minus Paris Saint-Germain star Neymar who was slammed for missing the emotional send-off.