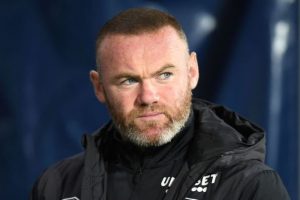 Less than 24 hours before Solskjaer was axed, United had been thumped 4-1 in the Premier League by Watford.

That result followed defeats to Aston Villa, Leicester City, Liverpool and Manchester City and club chiefs felt a change was finally needed at the top.

United were second best throughout their encounter at Vicarage Road and lacked the desire to turn the match on its head after going behind.

And Rooney was not happy with what he saw from the Red Devils players.

“Could the players have done more? A hundred per cent,” hissed the Derby County manager.

“I was so disappointed watching that game at Watford. As a manager you know you can set the team up, prepare, shape them – but there is no excuse for some of them performances. None at all.

“I’ve seen players waving their arms around, giving the ball away, blaming other people. It’s not acceptable. I’d be very angry if that was my players doing that.

“When you look at a club like Manchester United it is one of, if not the, biggest club.

“Those players are in a privileged position to play for them. With the players they have, they have to show more.

“I’m not saying they have to win the league or the Champions League – they just have to do more, show the fans they are working and playing for the club.

“That is the least you expect as a fan. Results may vary but you have to at least be willing to put the effort in.

“I remember Sir Alex Ferguson saying to me, ‘the hardest thing to do in life is to work hard every day.’ Whatever you’re doing, it’s so true.”

United are now eighth in the Premier League table after being leapfrogged by Wolves and Tottenham.

And they will face a tough task to secure a top-four finish after slipping six points behind West Ham, who currently occupy the final Champions League position.

The 13-times Premier League champions have appointed former midfielder Michael Carrick as their caretaker boss but are looking for an interim manager to oversee the team until the end of the season.

Mauricio Pochettino is currently the favourite to succeed Solskjaer, with Brendan Rodgers, Zinedine Zidane and Erik ten Hag also believed to be in the running to land the top job.