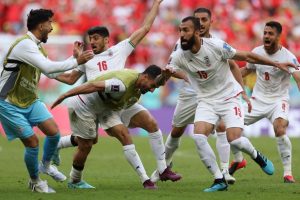 Wales hero James Collins has criticised Gareth Bale and Aaron Ramsey after the Dragons’ 2-0 World Cup defeat to Iran on Friday. Goals from Rouzbeh Cheshmi and Ramin Rezaeian consigned Rob Page’s side to defeat, with the British nation now likely to crash out of the competition in the group stages. And both of their star men failed to deliver on a difficult day at the office.

Wales were able to keep Iran at bay for the majority of the contest at the Ahmad Bin Ali Stadium.

But, after Wayne Hennessey received his marching orders for a wild challenge, the Middle Eastern nation were able to secure all three points with Chesmi and Rezaeian netting a quick-fire double.

It means Wales are now all but out of the World Cup, with Page’s side requiring a miracle to make it through to the last 16.

And Collins, who made 51 appearances for his country between 2004 and 2016, has criticised Bale and Ramsey by claiming neither of the duo delivered on the world’s biggest stage.

“You could hear the dejection in Gareth Bale’s voice and some of that might have been in his own performance,” he told BBC Radio 5 Live.

“He will know he hasn’t performed to levels we’re used to.

“But we can’t keep relying on Bale to dig us out, do something magic or score a worldie goal.

“We’re always talking about magic moments and even if he’s not playing well, it’d be a brave man to take Bale off.

“I’m sure he’d be honest though and say that wasn’t good enough and it wasn’t what we expect.

“You can say the same thing about Aaron Ramsey. Certainly if Wales were going to progress, we would need more from the pair – that might be harsh to expect it from them but we do expect more and unfortunately today they were not at the levels we are used to.”

Pat Nevin, who was also working for the BBC, also expressed a belief that Bale wasn’t good enough.

“If his name wasn’t Gareth Bale, you’d have taken him off and you would not play him in the next game,” he said.

“He had no impact whatsoever and he didn’t try to go by anyone.

“We know the Bale from the past but that didn’t look like the same guy.”

Bale himself, meanwhile, fronted up after the defeat and cut an emotional figure as he opened up on his side’s failure to secure victory in Qatar.

“It’s gutting,” said the forward, who plays for MLS side Los Angeles FC these days.”We’re gutted, there’s no other way to say it.

“We fought until the last second but it’s one of those things that’s difficult to take.

“We have to recover, we have to go again. We have to pick ourselves up straight away which is going to be difficult.

“We have one game left and we have to be positive. We’re still trying to enjoy the occasion as well.

“It’s going to be difficult, for sure, it depends on the other game and we’ll see.

“I haven’t seen the red card so I don’t know whether it’s the right decision.

“But, obviously, a red card changes the game completely. We let the first one in and the second one doesn’t matter.”

Wales had more possession than Iran, with the Dragons having 62 per cent of the ball.

But it was Carlos Queiroz’s side with the cutting edge as they boosted their chances of making the knockout stages.

Iran will face USA in their final game of the tournament on Tuesday, while Wales are due to face England – who could already be through by the time that match takes place.