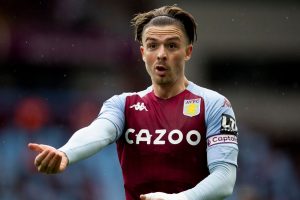 Aston Villa are losing the battle to prevent Jack Grealish from moving to Manchester City this summer.

Villa have been active in the transfer window so far, with Dean Smith bringing in and moving on a number of players.

Ashley Young has joined on a free from Inter, while Emiliano Buendia arrived from Norwich for £33million.

A number of players have also departed the club though, including Tom Heaton and Mbwana Samatta, who moved to Manchester United and Fenerbahce respectively. Villa are yet to formally accept the offer, but it appears they are willing to allow Grealish to move.

The transfer would become a British record, surpassing the previous one held by Paul Pogba, who re-joined Manchester United from Juventus for £93.25million in 2016.

Grealish has made more than 200 appearances for Villa, scoring 32 goals, since joining his boyhood club aged six.

Meanwhile, the 25-year-old returned to training this morning in preparation for the new Premier League campaign, which gets underway in less than two weeks time.

Will Grealish sign for Manchester City? Let us know in the comments section.

The Jamaican winger has undergone a medical in Florida ahead of his £30million move to Villa.

However, the club still have to agree personal terms with Bailey, as well as sort out work permit and visa applications before the deal can go through.

Bailey is currently still in the USA after taking part in the Gold Cup with his country and the move is expected to be completed towards the end of the week.

The 23-year-old has been at Bayer Leverkusen since 2017, after joining from Belgian side Genk.

Leverkusen are willing to let Bailey go after failing to qualify for the Champions League and the Jamaican revealed he was ready for a new challenge in a TV interview with ESPN last week.

“One hundred per cent I’m totally ready for the next step," he said. "I feel like I’m at a point in my life where I’m ready.”

Villa step up pursuit for Ward-Prowse

As Villa look set to loose one midfielder in Grealish, they have lined up a potential replacement in James Ward-Prowse.

The West Midlands club had a £25million bid rejected on Friday, but they are determined to continue to pursue the Saints captain.

The two clubs are at present not close to a deal, while the Saints would be unlikely to sell to a Premier League rival without a direct replacement.

Ward-Prowse signed a new contract with the club last summer which would see him stay at Southampton until 2025.

On signing the new deal, he said: “I think everybody knows it's a club that's very close to my heart."

But a move to Villa could prove attractive to the 26-year-old, who was part of Gareth Southgate’s 33-man provisional squad for Euro 2020, although he did not make the final cut.

Get your hands on your club's special edition 2021/22 annual. Find out more here .