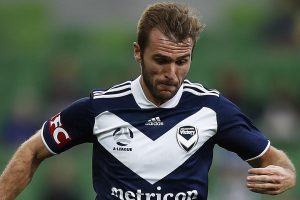 Melbourne Victory’s frustrating run with injuries has continued with confirmation that attacking weapon Callum McManaman will miss at least two matches with an ankle problem.

McManaman – man of the match in his former club Wigan’s upset 1-0 FA Cup final win over Manchester City in 2013 – has been one of the few Victory players to make an impression in what has been a horror season for the former A-League heavyweights.

The English winger scored a memorable goal in the Victory’s 1-1 weekend draw with the Central Coast Mariners at AAMI Park, but rolled his ankle in the same match.

“Unfortunately, the scan has shown some damage there so he will miss the next ten days and maybe slightly longer,” Victory interim coach Steve Kean said.

It means McManaman will miss the Victory’s match against Macarthur FC at AAMI Park on Thursday night, as well as the Melbourne club’s battle with Perth Glory at HBF Park on Sunday.

Callum McManaman (second from right) celebrates with his Victory teammates after scoring against the Mariners. Picture: Daniel Pockett/Getty ImagesSource:Getty Images

“He’s coming back from what was effectively a broken leg,” Kean said of New Zealand international Rojas.

“When I last spoke to him, he was hopeful that the supporters would see him before the end of the season but that depends on the calcification on the bone.

“Hopefully we see him back on the pitch soon, but it won’t be in the next couple of weeks.”

Kean was confident Folami would be fit for the Victory’s weekend trip to Perth.

However the coach was less certain about when import Shotton would be back.

“We’re hoping he can take part in full training in the next seven to ten days,” Kean said.

The Victory are also still without fullback Adama Traore, who is waiting the outcome of a disciplinary hearing following his sending off and subsequent touching of referee Chris Beath’s arm in his side’s humiliating 7-0 derby loss to Melbourne City.